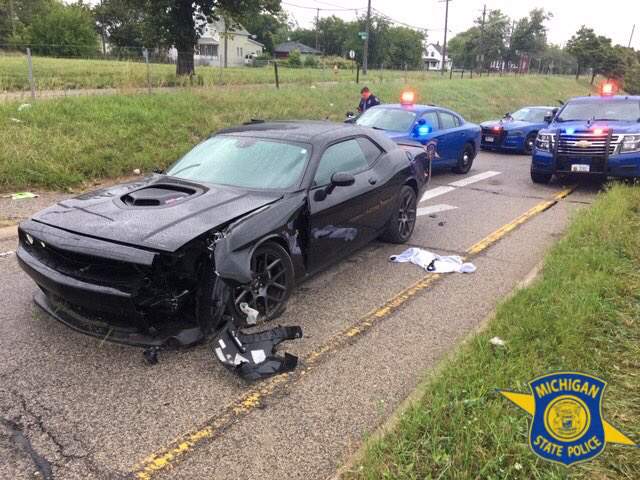 DETROIT – Michigan State Police arrested a driver who was in a stolen vehicle in Detroit Sunday in the area of Interstate 94 and Van Dyke Avenue.

In a series of tweets, MSP said a man called 911 at about 1:50 p.m. and said that he located his stolen Dodge Challenger and was following it. The vehicle was reported with Livonia Police Department.

“The vehicle was entered in as stolen by the VIN and it had a temporary registration plate affixed (paper plate),” read one of the tweets.

State police said troopers located the vehicle and attempted to conduct a traffic stop. However, the driver took off, initiating a car chase.

Police said during the chase, the driver attempted to squeeze through two vehicles while traveling on the interstate, causing damage.

No injuries were reported.

Two other passengers in the stolen vehicle fled the scene, officials said. The driver was caught and arrested a short distance away from the Challenger.

Police said a gun reported stolen was located in the vehicle. The driver did not have a concealed pistol license.

The driver was taken to the Detroit Detention Center.

See the twitter thread from Michigan State Police below.

Stolen Vehicle: On 9/20 at approximately 1 50 PM MSP 911
received a call from a citizen stating he located his stolen Dodge Challenger and that he was following it. The vehicle was entered in as stolen by the VIN and it had a temporary registration plate affixed (paper plate). pic.twitter.com/3NUsocU2tn