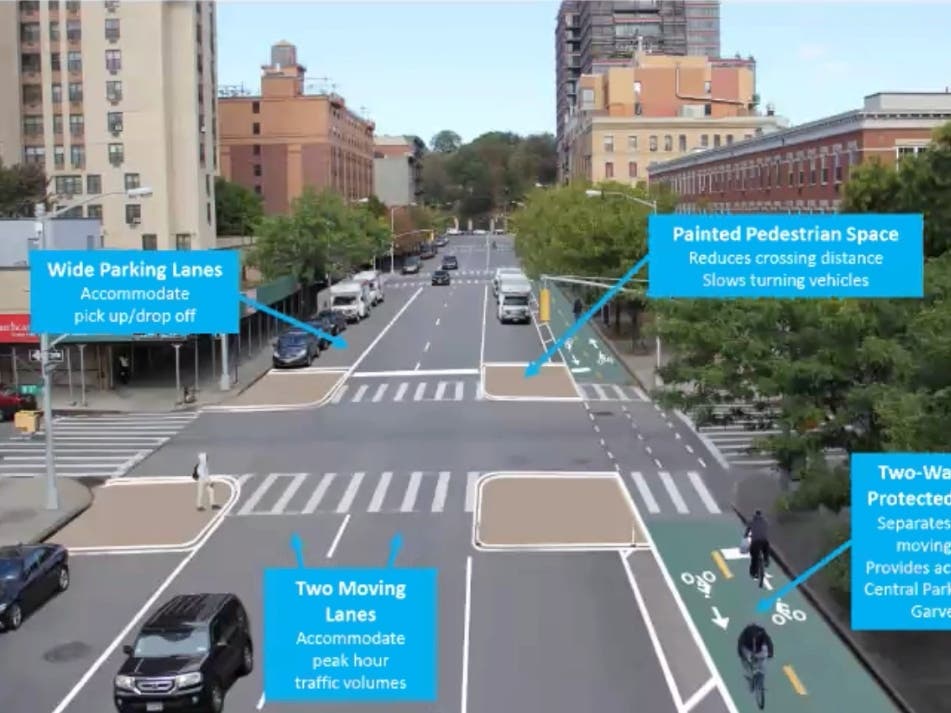 HARLEM, NY — The city’s plan to redesign a stretch of Fifth Avenue in Harlem, including the addition of a two-way protected bike lane, was met with a cool reception from that neighborhood’s Community Board 11 on Tuesday, who complained that the Department of Transportation had failed to seek their input before going ahead with the project.

The DOT announced Tuesday that it had begun work on the project, which has been planned since 2017. The bike lanes will connect Marcus Garvey and Central Parks, while the redesign also includes pedestrian islands, curb extensions and dedicated left turn lanes along a 10-block stretch from 110th to 120th streets.

But members of CB11’s Public Safety & Transportation Committee told a DOT representative Tuesday night that they had never taken a position on the project when the department had asked about it in the past, in part because residents had reservations about the number of parking spaces it would take away and its impact on Marcus Garvey Park.

“Typically when DOT does a project of this size … we work together,” member Jose Altamirano told DOT representatives Tuesday. “It was very disappointing when we found out it went ahead in that particular fashion.”

District Manager Angel Mescain told the DOT that the board was typically supportive of bike lanes, but felt this project was unnecessary, since traffic on that stretch of Fifth Avenue is typically light.

“You could bike on this street backwards, and you’d be fine,” Mescain said.

Mescain also took issue with the modest, 10-block stretch that the city has set aside for the redesign, pointing out that the bulk of Fifth Avenue above and below this segment still lacks bike lanes.

“Something like this being implemented, and the mayor waving his flag of how great he is because he put in a 10-block protected bike lane, to me is absurd without having the northern stretch and the southern stretch,” Mescain said. “Real vision would be continuing this down to 59th Street.”

In response, Kimberly Rancourt, director of Director of Special Projects for DOT in Manhattan, said the department is working to add bike lanes on Fifth Avenue below 59th Street, which would highlight the stretch along Central Park as a gap to be filled.

The DOT said Tuesday that markings have been painted along the stretch of Fifth Avenue, while green paint for the new lanes and pedestrian islands will be added later this week.

Past coverage from Patch: