My helmet visor has fogged up a bit, I am humming a popular tune and grinning like a Cheshire Cat. The wet roads look like a shimmering river cutting through the lush green scenery. There’s something magical about monsoon and the western ghat that just clicks. No wonder, every year […] 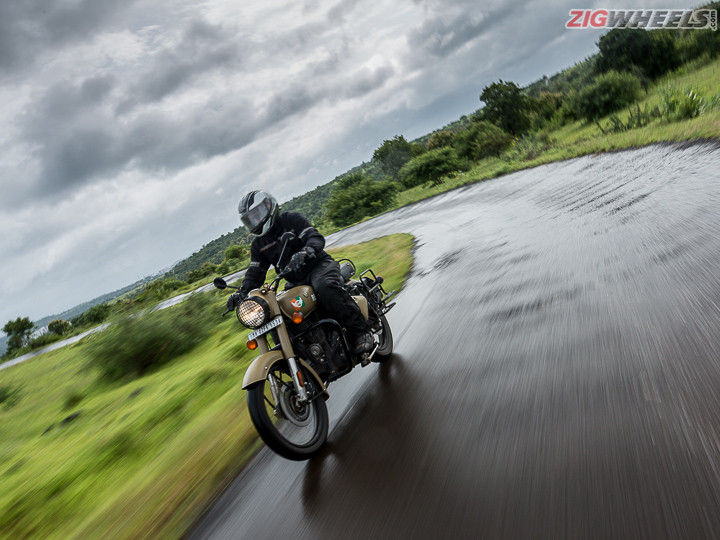 My helmet visor has fogged up a bit, I am humming a popular tune and grinning like a Cheshire Cat. The wet roads look like a shimmering river cutting through the lush green scenery. There’s something magical about monsoon and the western ghat that just clicks. No wonder, every year like me, a bevy of bikers ride through these roads under a heavy downpour. However, this time around it’s a bit different, after an almost six-month hiatus due to the COVID-19 pandemic, I was back on one of my favourite set of roads.

Despite riding through them on innumerable occasions, I never felt the same level of attachment. It’s the same case with the bike which I was riding. I had ridden the Royal Enfield Classic 350 time and again, but it never hit the spot for me. The pandemic has taught us a lot of new lessons and brought about a lot of change, is it the same with the BS6 Classic 350 for me? To find the answer, I went on my first post-lockdown ride to Pune from Mumbai.

Let’s start our journey with the motor. With the BS6 emission norms axing many motorcycles, we had thought that it was the end of the road for the UCE (unit construction engine). However, Royal Enfield thinks that the UCE can co-exist with the upcoming new engines that will power the Royal Enfield Meteor and other bikes based on the J-Platform. The only visual change that distinguishes the BS6 engine is the addition of a catalytic convertor on the header pipe and that it features fuel injection. Press the starter and the air-cooled workhorse comes to life in a typical lazy manner and quickly settles to an idle, unlike the bike that’s shaking and vibrating. The BS6 transition has dropped the power marginally, but the torque figure remains intact at 28Nm.

On the move the new Classic 350 feels similar to the older bike, but it just feels slightly more eager owing to the addition of fuel injection. This eagerness is clearly evident in our performance test as it’s almost one second quicker to 80kmph and it even managed to cross 100kmph. The Classic 350 never was about performance and so is the case with the new bike. It’s a lazy cruiser and the sweet spot for this bike is between 70-75kmph, minor vibes from the bike rush through your body, with a soft thump from the motor and the motorcycle just feels happy. Try to cross 90kmph and the bike starts shaking harder than a metalhead in a mosh pit. I am not a big fan of people that label flaws of a motorcycle as character, but around 70-75kmph, the Classic 350 transcends into a zone that blurs all its flaws.

Don’t worry, I am not zoning out, although I wish I could. The Classic has its own set of flaws and something that will not please RE loyalists is the fact that the thump is very mellow. You hear more of the intake than the exhaust and this could be owing to the new norms, something that can be easily fixed with an aftermarket exhaust. Another irritating trait is a bit of flat spot over 70kmph; you can complete a chant when you open the throttle to overtake. Also, the gearbox might be a bit moody and gear shifts from first to second can be a bit dodgy sometimes. The addition of fuel injection has helped improve fuel efficiency by around 8 percent, this will be helpful while touring.

Underpinnings have been left untouched and it feels similar to the older bike, But there’s one big difference and that’s the brakes. The brakes on the Classic 350 always felt wooden, not the right kind of nostalgia if you ask. The new brakes with dual-channel ABS (standard on the Signals Edition) have a significantly better bite and feedback, offering a lot of confidence on the wet roads. In our 80-0kmph braking test, it managed to stop almost 4 metres shorter than its predecessor. While it might look like an insignificant figure, that’s the length of a Maruti Dzire.

Our test bike was equipped with Ceat Zoom Plus tyres and on the wet it felt very nervous. While the MRF tyres weren’t the best rubber out there, they did a much better job with respect to grip. The suspension setup is slightly on the firmer side and you can feel undulations at higher speeds. However, it absorbs broken roads and potholes in a trouble-free manner at low speeds. Our test bike was also equipped with an optional touring seat, and I will highly recommend it. The seat foam is much firmer and you don’t ‘sink in’ and it isn’t bouncy like the sprung standard seat.

Styling, as you can see, remains unchanged and it retains all the retro visual elements that made the Classic 350 tick among the bikers and the Signals Edition adds to that nostalgia. To widen the appeal, RE has introduced many new colour options on the BS6 variant.  Build quality still remains rugged, but we would have appreciated a fuel gauge; instead you get a reserve fuel indicator. Our test bike was equipped with official Royal Enfield GMA (genuine motorcycle accessories) and we will be talking about them in a separate article.

With the ride over, it’s time for the verdict. The BS6 update has come at a premium of around Rs 14,000 and the new Classic 350 Signals Edition retails at Rs 1.78 lakh (ex-showroom). While the premium isn’t a small amount, when one compares the over Rs 20,000 price hike of the BS6 Benelli Imperiale 400, RE has done a much better bike. The Classic 350 still isn’t a perfect bike by any stretch of the imagination. It still feels crude and a bit raw in many departments.

However, in a world where everybody is trying to go retro and neo-retro, it remains the OG retro motorcycle in essence and feel. In an increasingly digital world, the Classic 350 still manages to stand out. While a smart watch may have more features and functions, a chronograph still ticks and speaks to your heart. The Classic 350 still hasn’t made me its fan, but I am more of an admirer. With the emission norms getting stringent and electric vehicles gaining prominence, the Classic 350 could be the last of its kind. As for me, my quest begins to plan a next ride in the monsoon before it makes a retreat.