Portland’s second-most-ridden neighborhood greenway is being lined up for possible improvements. Southeast Clinton Street currently sees auto traffic volumes near 26th Avenue that are triple the city’s target for a neighborhood greenway and long stretches where auto speeds are 6 to 8 mph above the 20 mph limit. Three months […] 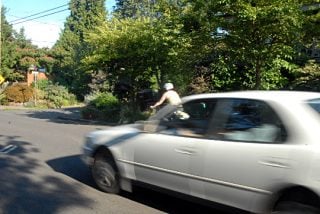 Portland’s second-most-ridden neighborhood greenway is being lined up for possible improvements.

Southeast Clinton Street currently sees auto traffic volumes near 26th Avenue that are triple the city’s target for a neighborhood greenway and long stretches where auto speeds are 6 to 8 mph above the 20 mph limit.

Three months ago, after joining Transportation Commissioner Steve Novick to call a summit about bike safety, Mayor Charlie Hales said the city “will experiment with diverters — which allow bicycles through but block cars — at different locations.”

It was the city’s single most substantive response to a series of major biking collisions this spring, and followed years of pressure from the Bicycle Transportation Alliance and a year of noisy organizing by BikeLoudPDX.

In a mailer that arrived at nearby addresses Tuesday, the city announced an open house to start discussing the possibilities. It’s Wednesday, Sept. 16, from 6:30 to 8:30 p.m. at Abernethy School, 2421 SE Orange Ave. 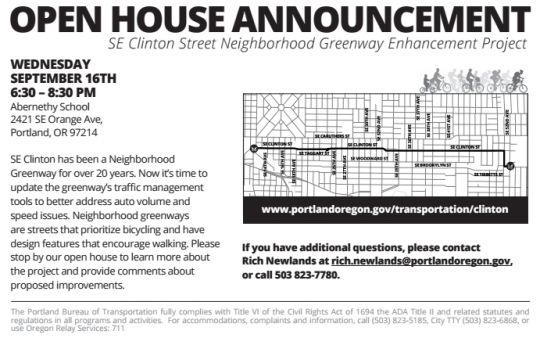 We reported in July that the city had chosen Clinton as the site of the first such experimental diverter or diverters. Hales’ concept of on-the-ground experiments was inspired in part by the successful recent demos by Better Block PDX of better walking and biking spaces on 3rd Avenue and Naito downtown.

Last week, a major report from the city about the state of its neighborhood greenways named Clinton Street as one of five bike routes that need of some combination of diverters, speed humps or other traffic-controlling and calming measures. (Another was Lincoln-Harrison-Ladd, the city’s most-ridden neighborhood greenway.)

At stake is whether the crucial bikeway through Southeast Portland can be made comfortable enough to appeal to bike users of all ages and abilities. Also at issue: whether making it more complicated to navigate Clinton in a car might threaten the businesses that make Clinton such a useful part of its neighborhood.

Years ago, when the city took a political beating over installing a diverter at Clinton and Chavez, some city staffers swore off diversion projects.

But a lot has changed in the years since. Division Street’s population boom has increased the number of people who live close to Clinton’s businesses. Thanks in part to that diverter at Chavez, the number of people biking on Clinton during rush hour has doubled since 2006. Today, bikes account for a bit more than half the traffic on Clinton during the evening peak hour. 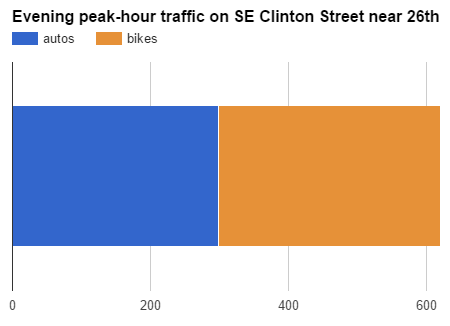 Most of all, the Clinton bikeway may have never had such an indefagitable and organized group of fans. In the last year, they’ve organized a month-long festival to celebrate the Clinton bikeway’s 30th birthday; won a series of seats on the Richmond Neighborhood Association Board; and conducted their own volunteer traffic analysis in case the city missed a chance to count the traffic itself. (The city didn’t actually miss the chance, so our understanding of Clinton’s traffic patterns is now even richer.)

Speaking of that volunteer traffic analysis, here’s the detailed set of recommendations for Clinton diverters prepared pro bono by one of the activists, traffic engineering pro Brian Davis of Lancaster Engineering. If you’re interested in attending this month’s open house, it might make for some good homework.