The Pebble Beach Concours d’Elegance, a show and competition for classic automobiles, shows off 175 of the most extraordinary vintage cars on earth — many of them worth millions of dollars. Richard Adatto, an expert on pre-World War II French cars, talks about the artistic appeal of vintage vehicles and […]

The Pebble Beach Concours d’Elegance, a show and competition for classic automobiles, shows off 175 of the most extraordinary vintage cars on earth — many of them worth millions of dollars. Richard Adatto, an expert on pre-World War II French cars, talks about the artistic appeal of vintage vehicles and what he looks for as a judge at the prestigious Pebble Beach event. 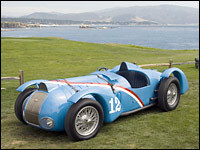 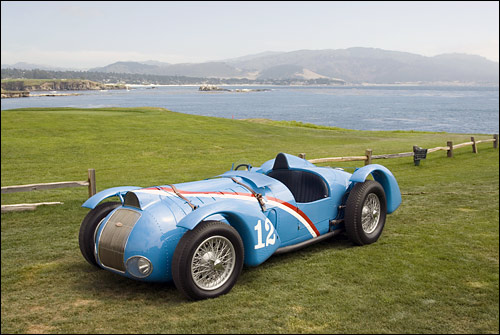 Some very old models are on display this week in California and the nameplates go well beyond Ford. The annual Pebble Beach Concours d’Elegance is underway. And for vintage car enthusiasts, like Richard Adatto, it is the event of the year. He’s an expert on pre-World War II French cars and a judge at the elite competition this Sunday.

Mr. RICHARD ADATTO (Vintage Car Enthusiast): We have 175 cars of some of the finest cars that the world ever produced. They’re antique cars, racecars, classic cars, Ferraris. Some of the most interesting cars that were created.

Like this time we’re featuring a Delahay, which is a luxury brand in France that was made like cars for kings, merchant princes, affluent people. And these are the kind of grand touring cars that people took from their home in Paris to the hotel on the beach. That was the kind of spirit these cars were built in.

BLOCK: And when you look at one of those Delahays, what do you see?

Mr. ADATTO: I see sweeping French curves, voluptuous shapes. I see flowing lines. And I see something that’s like rolling sculpture. These are art forms that could be in museum.

Mr. ADATTO: They’re unique. Each one is custom built purposely for some event. It was typical that some businessman would order a car from a coachbuilder, find a very fast chassis with an engine. The guy would build the body. His wife would go to the Chanel house, have a dress picked out. They would coordinate the color of the car and the interior with her gown, and then they would go to a party or a show as a kind of coming out piece. So these cars were built for people that were fairly affluent at the time. And they were kind of expensive cars now, and they’re highly valued prize pieces today.

BLOCK: You said kind of expensive. I would think it would be astronomically expensive to own one of these cars.

Mr. ADATTO: Well, actually, when they were produced, you could buy a Ford for $800 or one of these cars for $12,000. And today a lot of these cars are worth in the millions of dollars. So, yes, they are astronomically expensive.

BLOCK: Now when you’re judging this competition, you know, when we think about dog shows, we know they’re looking at teeth and they’re squeezing haunches. What are you looking for?

Mr. ADATTO: What we look for first is the authenticity of the car. An owner has to have a provenance for the car to make sure that it’s, you know, it’s not made up or it’s not recreated. Then we look for the fit and the finish. We walk around the car. How does it look like? You know, does the chrome fit? Does the door open? Is the glass nice? Do all the electrical items work? We kind of go through the entire circle on that.

The car has to drive onto the field under its own power. They have to start up the engine. We grade the engine. How does it sound? What does it look like? And then we kind of look at the interior and we look at the whole car on a whole for elegance. So it’s sort of like a dog show.

BLOCK: And then somehow among all these different classes of cars, you have to come up with best in show.

Mr. ADATTO: Best in show. We pick best in show from all the cars that have a, that are first in their class. Each kind of group of cars are a subset. There’d be two Delahay classes and two Voisan classes and a Cadillac class and a Packard class and a Rolls Royce class.

The best of each class in their class, which are 24, will come into the winner’s circle. And the chief class judges walk around, look at all the cars, everyone writes their names on their ballots, puts it in a box, and the chairman looks at the ballots and that’s how best of show is picked.

BLOCK: You know, Mr. Adatto, you’ve been in this world of classic cars and breathing this rarified air for a long time. I wonder if there are still cars that you see that really just make your heart skip a beat.

Mr. ADATTO: There are cars that make my heart skip a beat, you know, each day. Believe it or not, cars are still being discovered in Europe and in California. Three years ago, we discovered a very famous racing car in Santa Monica in a garage. The most exciting thing for me is finding an un-restored car that has beautiful lines and has really great history. And believe it or not, we’re still discovering them.

BLOCK: Well, Richard Adatto, it’s good to talk with you. Thanks.

BLOCK: Richard Adatto will be judging at the Pebble Beach Concours d’Elegance this Sunday.

Copyright © 2006 NPR. All rights reserved. Visit our website terms of use and permissions pages at www.npr.org for further information.

NPR transcripts are created on a rush deadline by Verb8tm, Inc., an NPR contractor, and produced using a proprietary transcription process developed with NPR. This text may not be in its final form and may be updated or revised in the future. Accuracy and availability may vary. The authoritative record of NPR’s programming is the audio record.