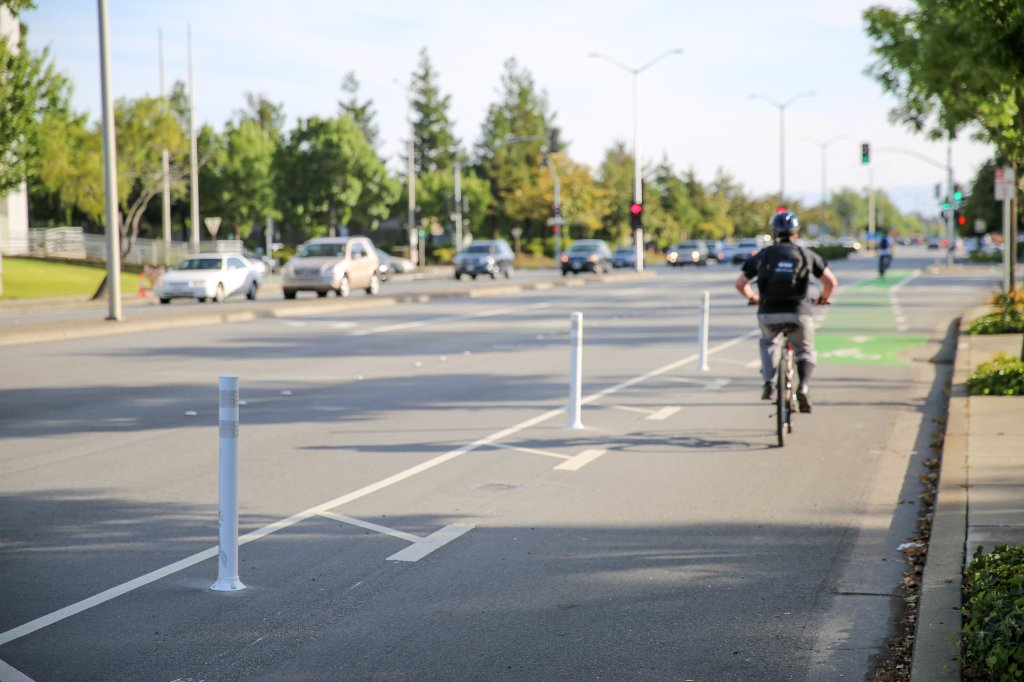 FREMONT — As part of its goal to reduce roadway fatalities and major collisions between drivers, cyclists, and pedestrians, the city plans to spend $750,000 to improve bike lanes on 10 miles of streets starting next month.

The Fremont City Council is expected to approve the funding request — which would be paid for out of local, regional, and state transportation coffers on Sept. 1 as it pushes ahead with a major tenet of Fremont’s “Vision Zero” plan.

“Everything in the whole city was designed previously for vehicles, and the people who are biking deserve to be safe,” Susie Hufstader, the advocacy manager for Bike East Bay said Friday in an interview.

“Fremont is fortunate to have had limited major bike crashes, which are bike crashes resulting in a severe injury or a fatality, in recent years, but our goal is of course zero,” Bomberg said.

“Most of our recent major bike crashes have been on streets that have either lacked bike facilities entirely, or where it’s a standard bike line on a high-speed roadway with no separation or protections.”

Between 2013 and 2015, the city had an annual average of 34 major crashes of all transportation types, and that dropped to a 23 per year average after the city’s vision zero programs have been in place between 2016 and 2019, Bomberg said.

The upcoming project will take about a month to complete, Bomberg said, and will cover 10.3 miles across sections of several roads including Driscoll Road, Grimmer Boulevard, several sections of Paseo Padre Parkway, Stevenson Boulevard, and Walnut Avenue.

Some residents have bristled at the many changes the city has made to its streets, claiming they clamp down too much on drivers’ ability to get around.

Bicyclists and transportation blogs, however, heaped praise on the recent revamp of Walnut Avenue, where a stretch of roadway was completed with a major renovation including elevated, paved bike lanes, redesigned intersections with protective islands that slow car turning, and new signal technology.

Noe Veloso, the city’s principal traffic engineer, said the city has heard the complaints, and tries to focus on making protected bike lane improvements, or more intense renovations like Walnut, only in areas where they are the most beneficial.

“We are being very targeted. We understand that we are going to be impacting motorist movements and behaviors, but that is part of the goal. But we’re also trying to do this in areas where we do see high levels of biking and high levels of pedestrian activity,” Veloso said.

“We’re not going to be doing these improvements citywide, but in areas where we have high-density housing, we have people who walk and bike to transit centers.”.

Though these road changes are based on a 2018 bicycle master plan and were in the works long before the coronavirus pandemic, city officials and advocates say there has been a major uptick in bike riding interest, with bike shops being hit hard by people seeking ways to get outside and be active.

“It’s a really big boom at the moment. And it’s very important that if people are trying out a new hobby or picking up biking for transportation, that they can do so safely,” Hufstader said. “People who are new to riding or who maybe are picking up a scooter share for the first time, they’re not going to feel safe riding down Stevenson without some kind of protection.”

Fremont also has more plans in the works, Bomberg said, such as revamping intersections at Mowry Avenue and Stevenson Boulevard at Fremont Boulevard, to make it easier for pedestrians and cyclists to be seen by drivers, and get through safely.

Andreas Kadavanich, a longtime Fremont resident and bike-riding enthusiast, said he’s encouraged by Fremont’s leadership in taking on very car-centric city design and improving bikeways in the name of safety.

“We really need more protected bike lanes and we need them soon. We’ve had three bicyclists killed on Fremont roads in the last five years,” he said. “I do wish more cities would follow that lead and follow it faster.”