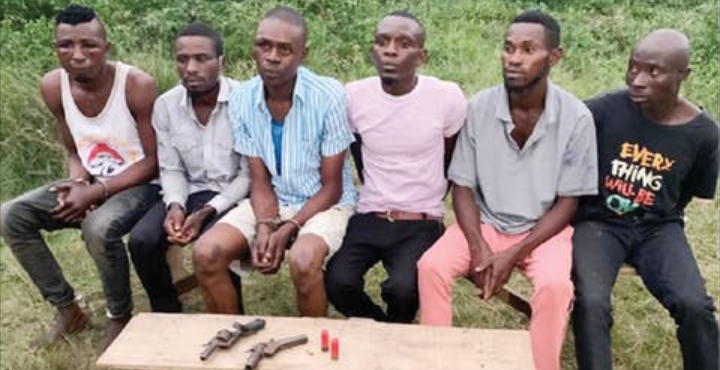 Suspected kidnappers who kidnapped Mrs Ekwele Agube, wife of the Appeal Court judge in Cross River State have narrated the roles they played in the crime and how they shared a ransom of N6.8m paid for her release after they were arrested by the police.

Recall that the personal assistant of wife of the appeal court judge identified as Glory Mpama was murdered during the kidnap on July 4, 2020 along Ministry Road in Calabar after which wife of judge was released.

The suspected kidnappers who were arrested by operatives of the Inspector-General of Police Intelligence Response Team revealed that they collected N6.8m ransom.

This revelation was made after the Police Public Relations Officer in the state, DSP Irene Ugbo had said the woman was released unconditionally.

According to City Round, IRT detectives led by DCP Abba Kyari apprehended six members of the gang recently after one of the phone number used to negotiate the ransom was traced to one Nsense Bassey aka Lion.

Other suspects are identified as Edet Ene, Christopher Effaeyo, Etim Offiong, Bassy Effiong , and  Luis Otubassy, while two-locally-made guns and 15 live cartridges were recovered from the suspects.

He was said to have confessed to the crime and led the operatives to arrest five other accomplices, including an informant and a boatman, who ferried the victim to their camp in the creeks.

30-year-old Bassey confessed in an interview that he led the gang to kidnap two others, a Cameroonian diplomat and a businessman.

He said the two victims spent one week each at their den and were released after a ransom of N2m each was paid for their release.

He stated he took to kidnapping because he had no means to feed his wife and their four children during the nationwide lockdown occasioned by the COVID-19 pandemic.

Bassey said, “I was doing menial jobs to sustain my family but when the COVID-19 pandemic started and there was lockdown, I had no job and my family was hungry. One of my friends known as Christian introduced me to kidnapping. I joined because there was no way I could get money to feed my children.

“Our first operation was at White Market area of Calabar where we kidnapped an Igbo man selling auto spare parts. We were six that went for that operation. We kidnapped the man on the road and took him to the waterside. I left them from that point and went home.”

Bassey, who explained that he got N300, 000 as his share of N2m ransom paid for the auto parts dealer’s release, disclosed that he used the money to buy clothes and food items for his family and set up small business for his wife.

He stated that one month later, they kidnapped the Cameroonian and collected N2m ransom out of which he was given N270, 000.

In his account, 25-year-old Otubassy, the gang’s informant and motorcycle operator, said he took to kidnapping due to government enforcement on the ban of motorcycles in Cross Rivers State.

He said, “I am a motorcycle operator and I joined the kidnapping gang when the government banned the motorcycle operation in Calabar. Nsense (Bassey), who we call Lion linked me to the gang and I was using motorcycle to carry the gang members around the town to look for victims.

“On the kidnapping of the Appeal Court judge’s wife, I didn’t know that her husband was a judge. I thought the woman was a contractor. I was the person who persuaded the gang to kidnap the woman and her aid was killed in the process. I was given N70, 000 as my share. I didn’t know they got N6.8m. I was only looking for money to buy pampers for my child. I am sad that I got only N70, 000 out of N6.8m.”

The gang’s boatman, Ene, 28, said he got a total of N280, 000 share from the operations he participated in and used part of the proceeds to rent a house. He said he is an orphan and joined the gang because he could not find a helper.

He stated, “I bought food for the victims. I am an orphan and have no one to help me that was why I joined the gang. I fell for them because I was hopeless. I haven’t enjoyed anything from the share I collected when the police arrested me. I need forgiveness; I will never take to crime again.”