The thermometer at Calvary Church in Woodland Hills registers 117 degrees during a heat wave last month. (Al Seib / Los Angeles Times) Despite scorching temperatures that shattered official records and led to deaths on the street, many chairs ended up sitting empty at the handful of city cooling centers […]

Despite scorching temperatures that shattered official records and led to deaths on the street, many chairs ended up sitting empty at the handful of city cooling centers set up to spare Angelenos from the blistering heat.

Fewer than 300 people used the six centers that were set up at Los Angeles city facilities over the Labor Day holiday weekend — averaging fewer than 11 visitors daily at each site, according to numbers provided by the office of Mayor Eric Garcetti. One cooling center in South Los Angeles had no one stop in at all on Labor Day or the previous Friday.

Homeless advocates and city leaders who have pushed for more cooling centers and other aid for unhoused people during heat waves say that such facilities are not underused for lack of need. Across the county, at least three deaths over the holiday weekend have been linked to the heat wave, including two within L.A. city limits, according to the county coroner.

But Los Angeles has a slim number of official cooling centers scattered across the vast city — and people are often reluctant to travel far in broiling temperatures. Many homeless people are uneasy about leaving their belongings behind on the street. And some people in need, housed or unhoused, are unaware that the city facilities exist.

“A lot of people don’t have transportation, and in the grueling heat, people just stay still as much as possible,” said Pastor Kathy Huck of the homeless outreach group About My Father’s Business. “If it were two blocks away, people would walk to it. But most of them are unreachable for people in encampments.”

When volunteers with the homeless outreach and advocacy group Ktown for All hit the streets to hand out frozen water bottles and tell unhoused people about a cooling center at Lafayette Park, many people asked them, “Are you going to take me there?” organizer Sherin Varghese said.

Even in the western San Fernando Valley, where some neighborhoods had the miserable distinction of exceeding 120 degrees, cooling centers were not overwhelmed.

Councilman Bob Blumenfield, who was distributing water and ice to homeless people in the area, said he urged an elderly woman living in her car to go to a Canoga Park cooling center five blocks away, but the woman feared her car wouldn’t make it. Blumenfield said he gave her cash for gasoline, but didn’t know if she ultimately made the trip.

For others in his district, the Canoga Park facility was simply too far — roughly four miles from some encampments under freeways, he said.

“If somebody has to walk to that cooling center, they’re not going to make it,” said Blumenfield, one of several council members who have called to open up more facilities amid extreme temperatures and smoky air.

The ongoing pandemic may have also dragged down turnout. Many cooling centers across the city also drew paltry numbers earlier this summer: L.A.’s Emergency Management Department said that 2020 attendance has significantly dropped compared with 2017 and 2018. When wildfires raged this month, Los Angeles opened up four “smoke relief centers” that could collectively hold up to 128 people. Only 11 people used them.

Huck said that fear of contracting COVID-19 has deterred some unhoused people from indoor facilities. But the pandemic has also shuttered many other refuges that Angelenos would ordinarily use to escape the heat, including libraries and shopping malls. One study published four years ago found that only 3% of Los Angeles households were in walking distance of an official cooling center, but 80% could reach libraries or other cooled, publicly accessible spaces.

And the pandemic also cut down the capacity of L.A.’s cooling centers, reducing how many people they can safely hold.

During the record heat, Councilman Herb Wesson announced that the Baldwin Hills Crenshaw Mall would open for two days as an additional cooling center. Fewer than 10 people came in that weekend, according to a mall representative, who described it as “a last-minute kind of activation.”

As people suffered in the blistering heat, local activists excoriated Garcetti for not opening up more cooling centers, calling for at least one in every neighborhood and public access to bathrooms and water at city buildings.

“I can’t stress enough the amount of visible suffering that everyone saw that weekend,” said Ktown for All member Nicolas Emmons, who recounted calling an ambulance for a man in visible pain, clutching a walker under a freeway.

That same weekend, Emmons said, he encountered an elderly man in Virgil Village sprawled on the ground at the height of the afternoon heat. “He said: ‘My muscles are so weak. I just had to fall down.'”

The six centers, not including the mall, could accommodate only 207 people at a time. Garcetti, when asked this week about the adequacy of the facilities, said the city was assessing what more it could do to help people during extreme heat, but stressed that “we’ve had plenty of capacity at the cooling centers.”

“If they’re filled up, then we open more … but there was plenty of space there, which indicated that people were finding someplace to be,” the mayor said, mentioning that nonprofits had set up additional sites to cool off.

Christopher Yee, a spokesman for the Los Angeles Homeless Services Authority, said its outreach workers start promoting L.A.’s cooling centers as soon as the city lets them know — usually a day in advance. The city has also promoted the sites online, through the media, and via signs posted outside the centers, according to its emergency management department.

But Rita Dunn, who is unhoused in the Northridge area, said that many people still don’t know about the facilities.

“Of course they were underutilized,” said Dunn, a founding officer of the advocacy group H-. “Nobody knew they were there.”

Councilman Mike Bonin, who wants to dramatically increase the number of centers, has suggested getting out the word through notifications on mobile phones, much like Amber Alerts. Blumenfield said that establishing a predictable system for which city facilities will open would also help with public awareness.

“If people knew that once you reach a certain threshold, all the libraries or the recreation centers would be open, people would know that’s an option and plan for it,” he said.

Each cooling center costs roughly $2,000 per day to operate, staffed with Recreation and Parks employees, according to the city emergency management department. The department said the sites, located at recreation and senior centers, typically provide activities such as puzzles and books and staffers may offer “mindfulness or chair yoga” to anyone interested.

Some argue that cities need to reimagine such services more broadly to better serve both housed and unhoused residents in need of relief.

Government agencies have been trying to do something good, but “we’re not considering the customer,” said Jonathan Parfrey, executive director of the nonprofit Climate Resolve.

“Have we fundamentally asked the question, ‘What will it take to help those people who don’t have air conditioning, who might be homeless, who don’t have the resources to turn on their air conditioners?'” Parfrey asked. “I don’t think we have. We’ve just gone to this default.”

Parfrey said many Angelenos may feel ashamed about seeking help, even when heat reaches miserable highs. He argued that to overcome that reluctance, L.A. should make cooling centers “an invitation to be part of something fun and joyful,” possibly by serving ice cream or screening the movie “Ice Age.”

Beyond Los Angeles, “people have documented that cooling centers are relatively underutilized across the U.S.,” said David Eisenman, a UCLA professor of medicine and public health.

What researchers have found, Eisenman said, is that people are more likely to use such centers if they are a part of everyday life.

“If it’s a library, people will go to a library and use that. If it’s a senior center they’ve gone to, they’ll be happy to go on an extreme heat day,” he said. But if the site is unfamiliar, “you’re not necessarily going to take the leap.”

Los Angeles County, which operates its own cooling centers, also had modest turnout at its sites. But Helen Chavez, associate director of its Office of Emergency Management, noted that the most heavily used county center was in unincorporated East Los Angeles, at a community center that had been a gathering spot before the pandemic.

It featured a huge screen playing a soccer match and felt “almost like an informal club,” Chavez said.

“For some of our cooling centers, we’re still trying to socialize the concept,” she said. “People are not used to going to a government facility for something like cooling.”

Representatives meet to discuss the future of transportation in Orlando

Mon Sep 21 , 2020
ORLANDO, Fla. – Driving in Central Florida can be anything but easy. But one group in Orlando is working to make transportation easier throughout Central Florida. Officials released the Orlando Transportation 2030 Report, Wednesday which helps to outline a blueprint for the region’s transportation future. The report takes into account […] 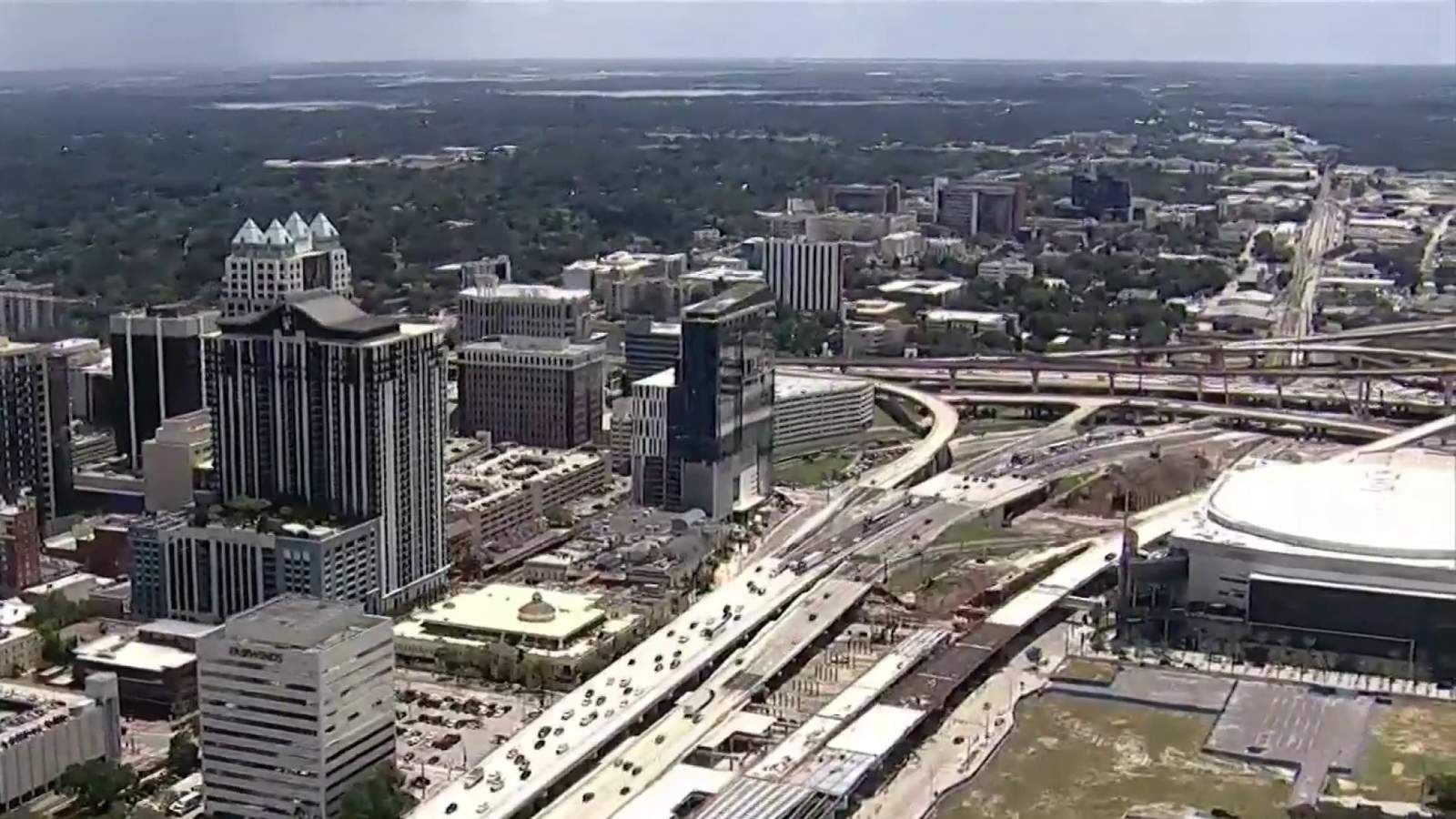