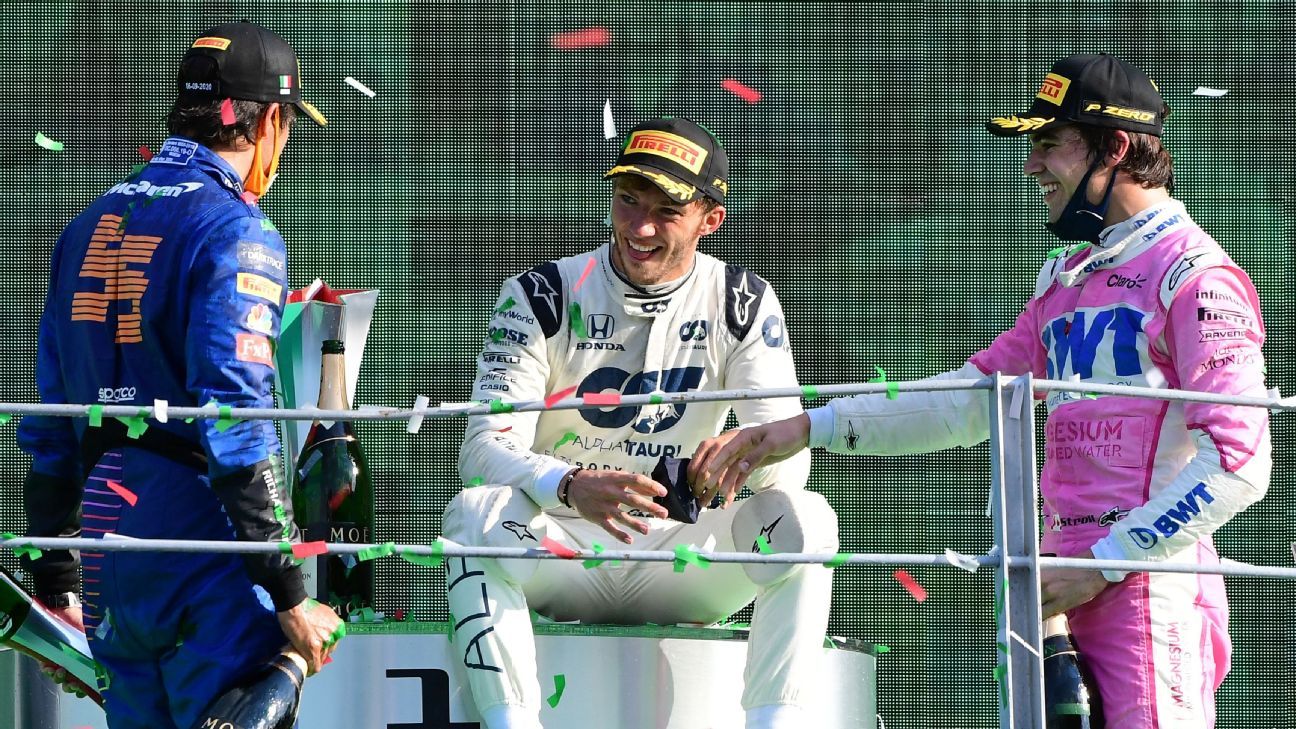 The Italian Grand Prix was one of the most unexpected race results in Formula One’s recent history, with a new race winner and a podium featuring three drivers with a combined age of 71 years old.

The outcome hinged on a few key moments and decisions but F1’s rule makers hope the next set of regulations will make the drama of Sunday’s race more of a norm.

A glimpse of F1’s future?

In what was looking worryingly like Formula One’s most predictable season in recent memory, Monza threw up a genuine shock.

That much was clear from the face of race winner, Pierre Gasly, as he sat alone on the podium following the champagne celebrations. His fellow top-three finishers, Carlos Sainz and Lance Stroll, had already left the stage, but Gasly took a seat on the top step of the podium, gazing over the pit straight, letting it soak in.

It was a remarkable result. At just over 24 years old, the average age of the three drivers on the podium at the Italian Grand Prix was the third youngest in F1 history. Even more remarkable was the fact that it did not feature a driver from Mercedes, Red Bull or Ferrari — the first time all three teams have been absent from the top three since the Hungarian Grand Prix in 2012.

We’ve become used to seeing youth on the podium in the form of Max Verstappen and Charles Leclerc, but this was a reminder of the depth of talent in F1’s latest generation of drivers. It’s something that’s easy to overlook when the likes of Gasly, Sainz and Stroll are stuck fighting in the midfield, but given the opportunity, they put on a thrilling show.

In many ways, it offered a glimpse of the future that F1 wants to see. Not just drivers of a young age being able to show their talent, but the fact that after the red-flag restart the race was wide open. It was a reminder of how exciting motor sport can be when more than just two or three drivers can win.

Once we knew Hamilton had a penalty, there was no knowing who would take victory after the restart. You could make arguments for Stroll, starting second, Gasly, starting third, Raikkonen, starting fourth, Sainz, starting sixth, Norris, starting seventh, or Bottas, starting eighth. The only certainty was that it would be a thrilling conclusion to the race.

That is what F1 wants for the future. It is hoping the introduction of a budget cap and fairer distribution of revenue from next year onwards will open up opportunities for different winners each week — a situation where you can watch a race start and not know for certain who will come out as the winner by the end of the first lap.

Why did Mercedes mess up?

As much as it was great to see midfield teams fighting for the win, it only happened because Mercedes got it wrong. When the Safety Car came out to clear Kevin Magnussen’s stricken Haas, Lewis Hamilton had the opportunity to pit and from that point onwards a comfortable victory slipped through the world champion’s fingers.

Race strategy 101 tells you to pit under a Safety Car, especially at Monza where the difference in time loss between a pit stop at racing speeds and a pit stop in a neutralised race is greater than anywhere else. But due to the positioning of Magnussen’s car near the pit lane entry, Race Control decided to close the pit lane as a safety measure, whipping the opportunity to pit away from the strategists.

The closed pit lane message flashed up on page three of the timing screens (there are four pages in total), but went unnoticed by the Mercedes pit wall, which was deciding which tyres to fit to Hamilton’s car to give him the easiest route to victory after the Safety Car. The message was also conveyed to the drivers by two light boards on the left of the track before the pit lane entrance on the right, which flashed up with crosses indicating a closed pit lane.

There were eight seconds between the pit lane being closed and Hamilton entering the pits, but during that time neither driver nor pit wall registered what was going on. One person back at the team’s factory spotted the message, but by that time Hamilton was already in the pits.

“One of the strategist shouted into the radio while we were entering the pit lane and there was confusion as you prepare yourself for the pit stop to make it good,” Mercedes team boss Toto Wolff said. “We were looking at this situation [on track] and no one looks at Page 3 to see that the pit lane is closed, we can’t see the signs [on track], this is just the sequence of events that screwed Lewis’ race. Not happy but you have to take it on the chin.”

The result was that Hamilton drove into a closed pit lane and with it came a 10-second stop-go penalty. The severity of the penalty may seem harsh, but it has to be draconian to remove any incentive to pit when the pit lane is closed for safety reasons. Hamilton went to the stewards under the red flag period to see the footage of the light panels for himself and admitted he was in the wrong.

We’ve become so used to seeing the Mercedes cars slice through the field that it was surprising when Valtteri Bottas failed to recover from his poor start to the race. In qualifying, the car had been 0.8s faster than the rest, but in the race that performance did not translate.

Bottas reported a puncture, but the tyre pressure sensors didn’t agree and there was no obvious damage to the car. There was a cooling problem on both Mercedes, but it was not limited to Bottas’ car and was down to the team expecting cooler temperatures on race day rather than any damage or reliability issues.

The team was able to open up the bodywork under the red flag period to ease the cooling issue, but the problem persisted until the end of the race. Hamilton managed to fight from the back of the field to seventh, Bottas was only able to make up one place on track after the restart when he overtook Kimi Raikkonen for fifth.

After the race, the lack of performance was still something of a mystery.

“Before being disappointed we have to find out what happened to the car,” Wolff said. “The car didn’t turn well into the right-hand corners. Valtteri thought he had a puncture but we couldn’t see anything on the data and that’s why we kept him out.

“But on those right hand corners you could see that he was losing a few car lengths to the car in front. Obviously if that happens through Ascari and Parabolica even with DRS you cannot overtake. A driver wouldn’t speak of a puncture right after the start if there wasn’t anything.”

Carlos Sainz was 0.4s away from a maiden Formula One win. Had the race not been red-flagged for Charles Leclerc’s accident, Sainz would have looked like the favourite to win as he was the driver set to inherit the lead of the race after Lewis Hamilton served his penalty.

The red flag effectively reset things at the start, allowing those who had not pitted to effectively have a free pit-stop and swap their tyres. Sainz lined up at the restart in sixth position, behind Hamilton, Stroll, Gasly and the Alfa Romeo pair.

Sainz has had some pretty rotten luck recently, including his car failing on the way to the grid at the Belgian Grand Prix seven days ago. He admitted that he started feeling sorry for himself during the wait between the red flag and the restart.

“A rollercoaster of emotions, obviously,” said Sainz after the race. “At the point of the red flag, I was negative, I was disappointed and I thought I had lost a chance at a win, and potentially a podium also.

“I had rage in myself, and again, thinking about the bad luck and this season and everything. I knew I had to restart a four lap-old medium tyre which is not easy, and I knew that the two [Alfa Romeos] in front of me had new softs.

“[Giovinazzi] had to pit, Hamilton had to pit, so maybe I was in contention for a podium, but the win, with Pierre, knowing how quick they’d been all weekend, I knew it was going to be tricky if Pierre and Lance [Stroll] got a good start.

“But honestly, since the restart, I just put my head down, tried to do everything I could to focus on catching them both and had a great battle with Lance in ‘Lap 1’. And then from then on, with that medium tyre that didn’t feel great, I just pushed as hard as I could to try and make it to Pierre – and nearly did.”

It might not have been a win, but this felt like a much-needed result for Sainz. He’s grown visibly frustrated at the amount of Ferrari questions thrown his way since his 2021 move was announced, but has seemed even more frustrated at being unable to follow that news up with a headline-grabbing performance until now.

Everything came together for him on Sunday and perhaps this will be the result he needs to rekindle some of his 2019 form on a regular basis.

A miserable day for Ferrari

The final word can go to Ferrari on what was another race weekend it will want to forget.

Neither of its cars were in the race to capitalise on the drama — Charles Leclerc’s heavy crash at the final corner is what triggered the red flag stoppage. Sebastian Vettel had already retired from the race with brake issues in the opening laps.

Technically, it was a Ferrari engine which turned the drab Italian Grand Prix into an instant classic. A suspected Ferrari power unit issue is what forced Kevin Magnussen out of the race and that prompted the deployment of the Safety Car and the Mercedes mistake which gave Hamilton his costly time penalty.

Given Ferrari’s recent form, it seemed fitting it wasn’t there to capitalise on the occasion presented to the midfield teams at Monza. The Italian team heads to next weekend’s Tuscan Grand Prix, its 1,000th race in Formula One, at the Mugello circuit it owns, at its lowest ebb in recent memory.

Spa and Monza were always going to be punishing circuits for the Italian team in its current state but it is remarkable that Ferrari has seemed so irrelevant in the competitive order in recent events. Some kind of turnaround at its home race would be a great way to inject some positivity into the team.