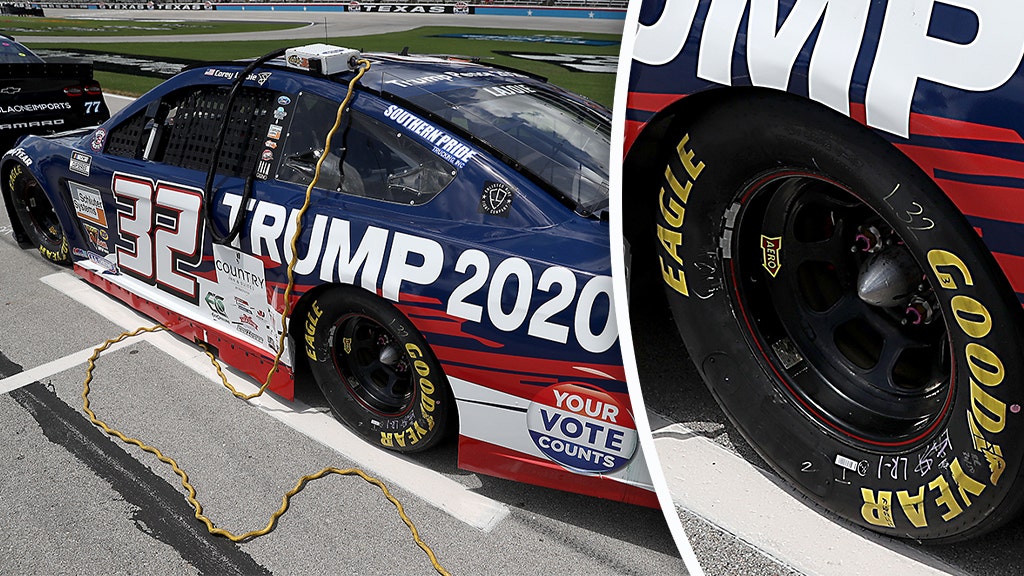 The lone NASCAR Cup Series driver with a “Trump 2020” paint scheme will continue to use Goodyear tires in upcoming races despite President Trump’s call Wednesday for a boycott of the Ohio-based tire company.

Driver Corey LaJoie has run a “Trump 2020” car at multiple races this season as part of a sponsorship deal between his team, Go Fas Racing, and Patriots of America, a political action committee supporting Trump’s re-election bid. Goodyear’s status as NASCAR official tire supplier has left Go Fas Racing with no choice but to use its product – and display Goodyear’s logo – alongside the Trump 2020 decal.

“We just have one way to run them,” Go Fas Racing general manager Mason St. Hilaire said in an interview with FOX Business. “It’s either those tires or no tires. We don’t have much of a choice. There should be two. I don’t know if you should just have one. You’ve got to keep something for the competition, right? Putting another one in would probably be a little bit of fun, both for cost and competition.”

LaJoie and the Go Fas Racing team are next scheduled to race the “Trump 2020” No. 32 car in the Coke Zero Sugar 400 at Daytona International Speedway on Aug. 29.

FORT WORTH, TEXAS – JULY 19: The #32 Trump 2020 Ford, driven by Corey LaJoie, waits on the grid prior to the NASCAR Cup Series O’Reilly Auto Parts 500 at Texas Motor Speedway on July 19, 2020 in Fort Worth, Texas. (Photo by Chris Graythen/Getty Image

Goodyear has been the exclusive supplier for all three NASCAR circuits since 1997, with all drivers required to use its tires on their cars during races. NASCAR and Goodyear extended their partnership in 2017.

NASCAR declined to comment on the situation. A representative for Patriots of America PAC did not immediately respond to a request for comment.

Trump called for a boycott of Goodyear tires earlier Wednesday after an employee at a plant in Topeka, Kan., shared a slide that he said came from the company’s corporate office in Akron. The slide listed Trump’s “Make America Great Again” hats as an “unacceptable” accessory for employees in the workplace.

Goodyear said the slide “was not created or distributed by Goodyear corporate, nor was it part of a diversity training class.”

“To be clear on our longstanding corporate policy, Goodyear has zero tolerance for any forms of harassment or discrimination,” Goodyear said in a statement. “To enable a work environment free of those, we ask that associates refrain from workplace expressions in support of political campaigning for ay candidate or political party, as well as similar forms of advocacy that fall outside the scope of racial justice and equity issues.”

St. Hilaire said Go Fas Racing felt no reluctance about continuing to use Goodyear tires and expressed concern that the company was at the center of a political dispute.

“You’ve just got to look at all the information, I guess, you look at both sides,” he said. “It doesn’t look like whatever was out there on the internet came from corporate. It looks like maybe it was some sort of independent-type form that came out. It’s unfortunate. How does that even get out there? I feel bad for Goodyear to deal with this stuff with everything going on right now. In a competitive atmosphere, if you had two different ones, you’d play who’s stronger.”

GET FOX BUSINESS ON THE GO BY CLICKING HERE

St. Hilaire said the deal between Go Fas Racing and Patriots of America remains intact despite Trump’s spat with Goodyear.

“They’re a great group. They’re out there getting everybody to vote and vote in a direction, push it that way. They’re pushing right through it. We’re excited to have them on. They’re with us throughout the time that we’ve set the contract for, so everything’s good,” St. Hilaire said.

NASCAR and President Trump have had a frosty relationship in recent months. The president was critical of NASCAR’s handling of the incident in June in which a noose was found in driver Bubba Wallace’s garage. The FBI later determined the incident was not a hate crime.