Project CARS 3 Review – Someone Should Ask for Directions

I approached Project CARS 3 as an opportunity to shake off the rust of driving games and get behind the wheel once more to test my skills. It had been a long time since I sat in the virtual driver’s seat and careened across the pavement, and Project CARS 3 felt like the perfect opportunity to step away from the arcade racers I so often drift towards and try something with a little more realism. However, as soon as the opening credits began to roll and the name Codemasters popped up on screen, I knew exactly the kind of ride I was in for.

Slightly Mad Studios, the developer behind Project CARS 3, was recently acquired by Codemasters – a studio also known for their racing game portfolio – and having had extensive experience with some of Codemasters titles, my expectations for Project CARS 3 became somewhat muddled: would it be a racing sim? Would it be an arcade game? The answer, strangely enough, is a hybrid. Rather than being a clean fusion of electric and gas powered innovation, the game seems to Frankenstein bits and pieces together from both genres to create something definitely unique, but whether or not that is a good thing is yet to be determined.

Racing Sim for the Casual Gamer

Like most racing sims, there is no narrative about a plucky hero who needs to work his way to the top of some racing league to defeat the big bad and save the town. Project CARS 3 just wants you to experience the feel of the road and help you get better at driving along the way. There is a helpful narrator that pops up to explain fundamental aspects of the games menu systems and objectives, but beyond that it leaves you to your own devices to figure it out. There are numerous cups to compete in, with each cup having four tournaments and each tournament containing four races. If that isn’t enough numbers for you, you’re in luck as I’m not even close to done. The first three races each have three objectives to complete. You’ll need to complete a minimum number of objectives before you unlock the final race of that tournament, subsequently still needing a certain amount of objectives completed to unlock the next tournament to get you one step closer to finishing the first cup.

Sound confusing? Project CARS 3 suffers from the same obsession with numbers as Codemasters previous titles do. You’ll have XP unlocked for your specific vehicle of choice to increase its own level which in turn raises your upgrade discount percentage. You as a racer will also gain XP and level up separate from your vehicles stats. You’ll also gain experience by preforming drifts, perfect turns, and many other driving feats which the game yet again shows you with more XP-rewarding wheels and meters to fill up. Upon completing a race you’ll need to navigate four or five screens flashing various amounts of XP in your face before you can move on, but the game does little to explain what this XP is for. These mechanics are right at home in arcade racers, but in a racing sim it slows everything down to a crawl. Finishing a race doesn’t even take you back to the race menu, it takes you back to the start of the one you just completed so if you aren’t careful you’ll accidentally run the same race again and make no progress. 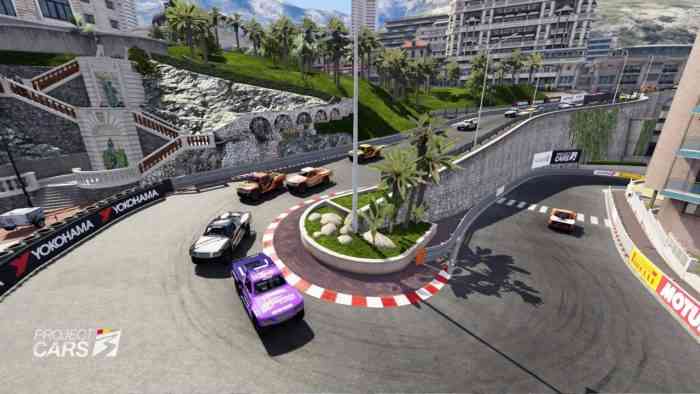 Mechanically speaking, Project CARS 3 does feel incredibly good. While you might be tempted to treat it like Need for Speed, players will want to treat this strictly as a racing sim. Brakes, acceleration, weather, everything feels like it should. For the less experienced, the game even offers a wide range of customization options for your AI difficulty and how much help you get on the road. I started out using brake assistance and road markers that not only tell you the best place to be and when to brake, but it corrects your speed if you are going too fast. I definitely needed it as I thought I could slam the e-brake and pull off a wicked power-slide only to spin out and hit the wall. You can’t just hold down the accelerator and hope for the best; Project CARS 3 makes you earn that victory by driving smart. These different difficulty and drive-assist features of course change your XP modifier but we don’t need to get back into that.

Of course what good is a racing game without cars? Project CARS 3 features over 200 across all manner of manufacturers and styles. They look absolutely beautiful and the in-game cost to buy the higher end vehicles is pretty reasonable given how much money you can make in the game. Your garage will even let you store multiple of the same car so each one can be custom built for specific race types. Upgrades such as tires, engine blocks, camshafts, etc can be purchased across three levels of quality early in the game for fairly cheap. Unfortunately, I immediately spent my winnings upgrading my first car and made it an absolute beast of a machine… only to realize I couldn’t use it anymore. Each cup requires a specific grade of vehicle and you unlock cups by winning the previous one (and completing x amount of objectives) or buying your way in. My car became too high-class for the first cup and so I had to downgrade – which cost money to do so. I was worried I had spent so much money that I wouldn’t be unable to downgrade enough to race and be stuck in some sort of limbo. Thankfully, unlocked parts all cost only $50 to swap back in; a meager amount considering I easily made at least $10,000 per race. 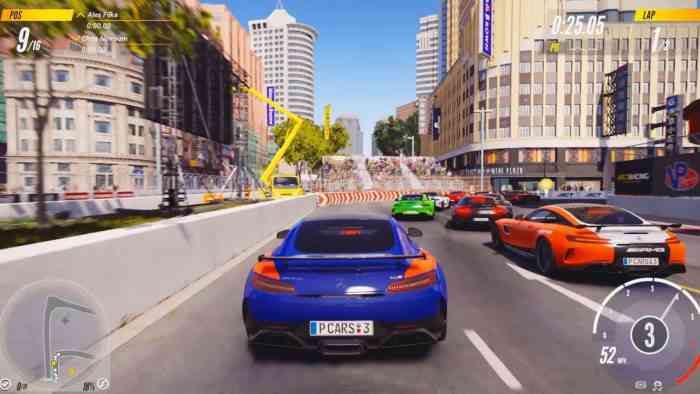 Customization isn’t limited to performance, there are a number of paint job options to apply so you stand out, as well as custom licence plates. I immediately dived in but was pretty underwhelmed. Games like Need for Speed have set the bar pretty high but Project CARS 3 keeps the focus on substance over style. You can slap a wrap on your vehicle, a number, and some sponsor logos, but thats it. Gone are the days of incredibly complex layers to create high-speed artwork. They want you to spend more time playing and less time making art I suppose.

Project CARS 3 suffers from a bit of an identity crisis in what it brings to the player, blending racing sim gameplay and arcade racer mechanics. Its message isn’t entirely clear without some trial and error, and while the narrator, drive-assist, and AI modifiers help ease into gameplay, there isn’t quite enough to know what everything means for the un-initiated. Driving feels wonderful and I expected nothing less given the history of Slightly Mad Studios and Codemasters, but this feels more like a racing sim for casual play over an engrossing and addictive time behind the wheel. It has a lot going for it, but its identity seems lost and with it, my drive to sink time into it.

**PS4 code provided by the publisher**