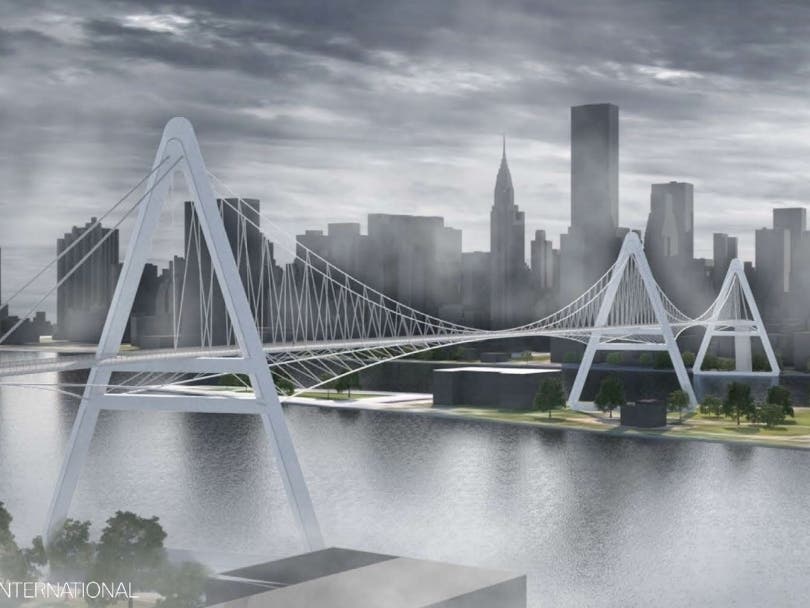 UPPER EAST SIDE, NY — An Upper East Side community board committee voted unanimously this week to move forward with a possible resolution backing the construction of a new pedestrian and bicycle bridge between Queens and Manhattan.

The vote Wednesday night followed a presentation by Samuel I. Schwartz, a former city traffic commissioner who is now a main force behind the push for the new, car-free bridge, which comes amid a surge in cycling during the coronavirus pandemic.

No major bridge has been built into the city’s central business district since the Manhattan Bridge was completed in 1909, Schwartz told Community Board 6’s transportation committee.

The existing infrastructure does little to accommodate cyclists — only 1 percent of the 3.8 million people who enter the Manhattan business district daily do so on a bicycle.

“I’ve been thinking about this for well over a decade,” Schwartz said.

That led Schwartz, along with a group of other engineers and the firm T.Y. Lin International, to design the Queens Ribbon, a sleek suspension bridge that would link Long Island City in Queens, Roosevelt Island, and Midtown East. The plans were first revealed in June.

The bridge itself would cost an estimated $100 million, Schwartz said, plus about $50 million to construct the terminus points on each end. It would be about 20 feet wide, with separated lanes for bicyclists and pedestrians.

The main concern raised by board members Wednesday was the bridge’s cost, given the city’s dire pandemic-era financial state.

In response, Schwartz pointed out that the timeline between a project’s concept and approval often lasts up to seven years, meaning the funding would not be needed until around 2027. Plus, he argued, real estate developers may be willing to contribute, given that the bridge would terminate near the sought-after Long Island City development site formerly eyed by Amazon for its canceled headquarters.

Schwartz also pointed to the dozens of major construction projects that the city embarked on during the Great Depression, arguing that the current crisis was no different.

“The biggest thinking occurred during the most dire times in our history,” Schwartz said.

Board member Ann Seligman also suggested that the bridge should terminate on East 48th Street in Manhattan — rather than East 51st, the current plan — to encourage closing the remaining gap on the East River Greenway. Schwartz said the terminus spot was flexible.

The committee’s 11 members voted unanimously to bring a resolution to the full board calling for the bridge to be built.

Ultimately, Schwartz aims to construct a total of three pedestrian bridges, with the others connecting Brooklyn with Lower Manhattan, and Manhattan’s West Side with New Jersey.

City Transportation Commissioner Polly Trottenberg said in June that she and her team would consider Schwartz’s proposals. The bridge would also need state approval in order to be built.