By Carly WipfSeptember 3, 2020 As people in downtown San Jose got arrested and detained for violating the city’s curfew amid widespread protests over the police killing of George Floyd in May, Mayor Sam Liccardo rode his bike multiple days after curfew without repercussions. That’s according to J.T. Stukes, a […]

As people in downtown San Jose got arrested and detained for violating the city’s curfew amid widespread protests over the police killing of George Floyd in May, Mayor Sam Liccardo rode his bike multiple days after curfew without repercussions.

That’s according to J.T. Stukes, a longtime activist who discovered the mayor’s activity on Strava, a fitness app that allows bicyclists and runners to publicly post their routes. Stukes is part of a federal civil rights lawsuit filed against the San Jose Police Department on July 18. He claimed police used excessive force during protests that caused him emotional and physical injuries.

City officials enacted a curfew from 8:30 p.m. to 5 a.m. May 31 in an effort to deter violent protests following the death of Floyd, an unarmed Black man killed in Minneapolis police custody.

The same day, around 7:19 p.m., public data from Strava shows Liccardo took a one hour and 19 minute bike ride from the East San Jose Foothills to his house on 15th Street. This would have put the mayor, who is an avid cyclist, back home eight minutes past curfew. But based on “elapsed time” or his total time tracked, he may have returned 29 minutes past curfew.

“If somebody tracking my online cycling account now asserts that several months ago, I rode my bike for five minutes beyond the curfew, then— assuming that I actually remembered to turn off the tracker immediately upon stopping— they’re probably right,” Liccardo said. “I’ll own it, and I can only presume that I miscalculated the duration of my return trip, and I apologize for my five-minute transgression.”

“I thought it was very hypocritical of him to put in place the curfew and then violate it blatantly,” Stukes said. “He did that ride. He knows how long it takes. And there’s no way he could have done that ride on the 31st — the first day of the curfew — and gotten back in time.”

Meanwhile, on June 1, a San José Spotlight freelance reporter was detained by police when trying to take notes and photographs past curfew, despite identifying himself as a journalist.

Stukes, who uses the app to track his runs, stumbled upon the data after searching Liccardo’s name. Since Liccardo returned shortly after curfew, Stukes said it was possible the mayor hustled home once he realized the time. But additional maps showed Liccardo violated the curfew again on June 1 and June 3. On June 1, he returned home one hour and 13 minutes past curfew and on June 3 he was six minutes past curfew, according to the app’s data.

The citywide curfew was lifted June 4.

During the protests on June 2, Stukes said he was tripped by San Jose police officers then hit in the leg and bruised by foam batons and shot by rubber bullets for being out past curfew.

“I went and looked at what he was doing the night I got shot, which was the second (of June), which was the only night he didn’t break curfew,” Stukes said. 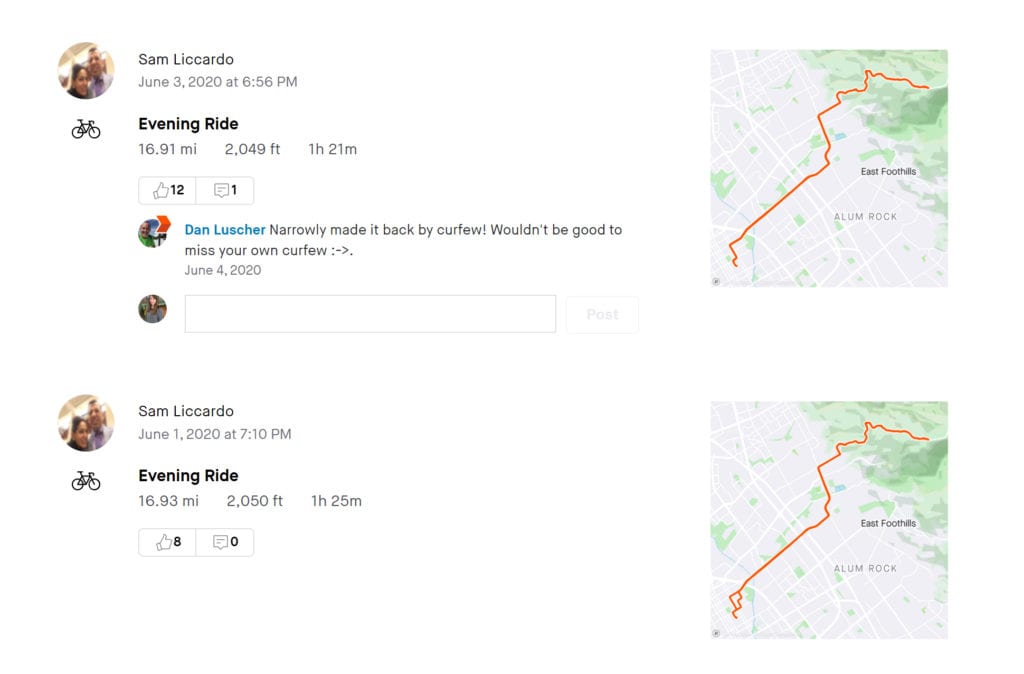 Strava records routes through smartphones and smart watches, allowing bikers and runners to share routes and comment on each other’s fitness achievements.

“Narrowly made it back by curfew! Wouldn’t be good to miss your own curfew,” Dan Luscher, Strata user and Bay Area strategic advisor, commented on Liccardo’s June 3 bike ride post.