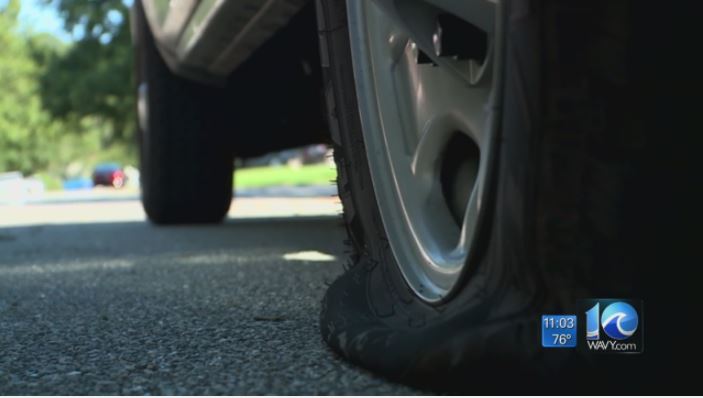 VIRGINIA BEACH, Va. (WAVY) — An act of vandalism marred what should have been a typical Sunday morning for residents in the Eaglewood area of Virginia Beach.

They woke up to find tires slashed on several streets.

“You feel violated. You get upset when you see this happening to your neighbors,” said Troy Brimmer.

He first noticed the damage Sunday morning when he took his walk.

“I was walking my dog this morning and I saw a few people working on their cars. I thought they were just getting a little work done on the weekend until I noticed car after car and really, as I’m walking my dog, I just saw a whole string of cars with flat tires,” he said.

Brimmer said it wasn’t long before he put the pieces together.

“On the Nextdoor app a lot of people were alerting each other and I had three neighbors right in a row all three changing tires at the same time — as well as many others. So, you could definitely see that this was a little bit more than your typical vandalism,” he said.

Almost every car along Dove Drive, parts of Woodcock Lane, and parts of Hummingbird Lane had damage to either one or two tires.

He had two of his vehicles damaged. He says he didn’t realize one of them until he was already driving and had to change it out on a busy road.

“You need to test drive your vehicles today because even if it doesn’t look like it flat, it could be flat,” he offered as advice.

Doherty seemed in good spirits despite the damage, but pointed out he feels like the people responsible were being inconsiderate.

“If 22 vehicles, according to the police, have flat tires, that’s in the neighborhood of $5,000. When does that add up? And it’s disrupting everybody’s life. Why do it, you know?” said Doherty.

Brimmer said the only good thing he saw from this was his neighbor’s willingness to help each other.

Police are still investigating this incident. If you are in the area and believe your vehicle was damaged, you’re encouraged to reach the Virginia Beach non-emergency number at 757-385-5000 and file a report.