The lash technician who clashed with police during her dramatic arrest at a COVID-19 checkpoint in Victoria has come under fire from Sunrise host David Koch.  Natalie Bonett, 29, continues to make headlines over the dramatic confrontation after she was stopped by police at a blockade in Wallan, north of […]

The lash technician who clashed with police during her dramatic arrest at a COVID-19 checkpoint in Victoria has come under fire from Sunrise host David Koch.

Natalie Bonett, 29, continues to make headlines over the dramatic confrontation after she was stopped by police at a blockade in Wallan, north of Melbourne, on her way to work on Saturday.

The officer told her it was against the law to have her phone attached to a car charger which was mounted onto her windshield.

Following a hostile exchange, the footage shows the officer reaching in to drag Ms Bonett from the driver’s seat.

The footage, which has since gone viral online has divided public opinion and was a hot topic of discussion on Sunrise on Monday. 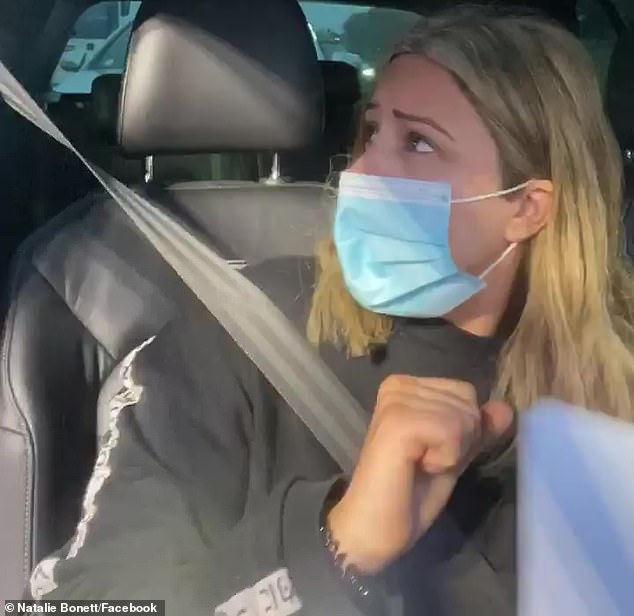 Koch didn’t hold back in sharing what he personally thought of Ms Bonett’s behaviour.

‘Did police overreact by dragging her out or was she being an arrogant little so-and-so and deserved it?’ he asked fellow presenters as he introduced the segment.

‘This is the way kids today are being brought up that you just ignore authority figures. ‘Why should I? I don’t have to do that!’ I’m sorry, but you do,’ Kochie fumed.

‘We have a generation that read this stuff on Facebook, saying you have rights too. Well, yes you do.’

His co-host and panelists all agreed.

‘The list of charges suggest they would have grounds to rule arrest her,’ Gillies said.

‘You’ve heard of doing it for the ‘gram’ right? I can’t help but feel that people are setting out to get a reaction with an explicit view of being able to post it on their own social media and they are setting out to do it. To say she might have feared for her life, someone is sitting next to her in the passenger seat.’

Beretta added: ‘I feel for the police in this situation as this girl is just out of control. It’s a disgrace and I hope she will learn a lesson and be fined.’ 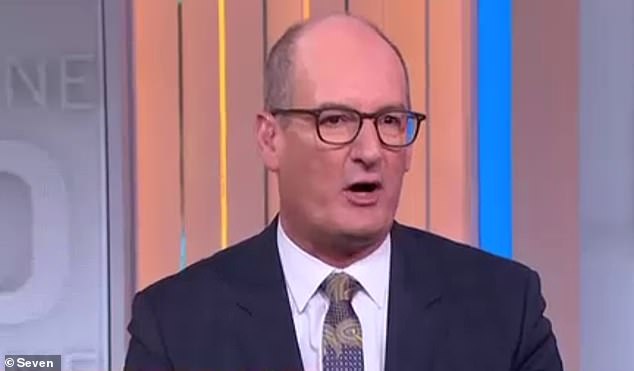 But not media personalities have defended the police.

Ms Bonett has since been inundated with requests for media interviews following Saturday’s with several television reporters visiting her at home on Sunday.

She uploaded bizarre footage of what happened behind the scenes when television reporters visited her home, which has since been deleted from Facebook.

Ms Bonett secretly filmed her encounters with two television reporters on home security cameras, which she later uploaded to Facebook but have since been deleted.

In her conversation with the Channel Seven reporter outside her front door, the journalist can be heard describing the police officer involved an ‘a*****e cop’ as she thanks Ms Bonett for talking to her.

‘I just wanted you to put your two cents worth forward so people aren’t judging from the video they saw,’ the reporter explained.

‘I appreciate your time and fingers crossed you don’t get hassled by another ‘a*****e cop.’

She later captioned the video: ‘Her words, not mine.’ 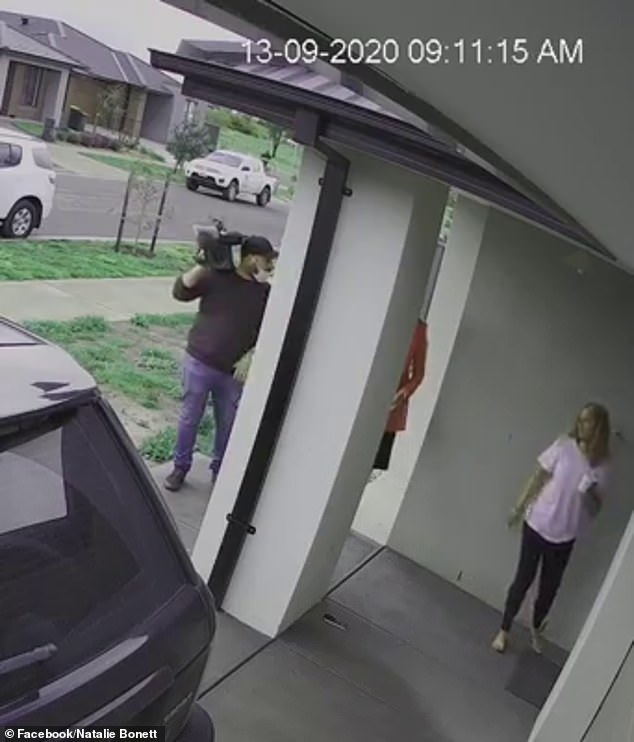 Ms Bonett also posted behind the scenes footage of her Channel Nine interview which wasn’t being recorded at the time.

‘All I wanted was for him to explain why it was a criminal offence,’ she tells the reporter in her front yard.

‘I go through that checkpoint every day, me and my partner.’

The reporter is heard telling Ms Bonett she has the same windshield phone holder that sparked the arrest.

During the arrest, police asked Ms Bonett to provide her name and driver’s licence but she requested to speak to another officer because the one that pulled her over made her feel ‘deeply uncomfortable’.

‘I didn’t refuse to show my licence, I simply refused to show it to him,’ she told Nine News. 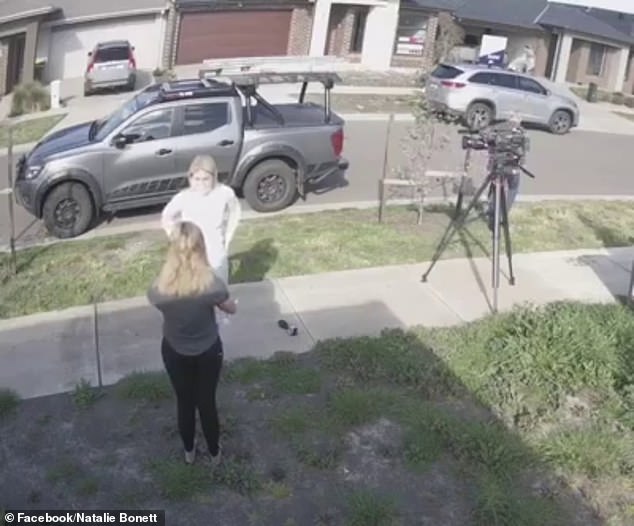 Ms Bonett also uploaded footage of her conversation with a Channel Nine reporter, which wasn’t being recorded by television cameras at the time 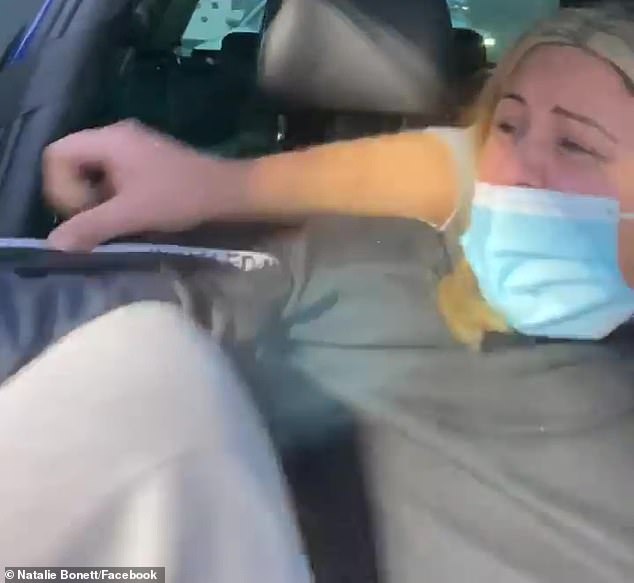 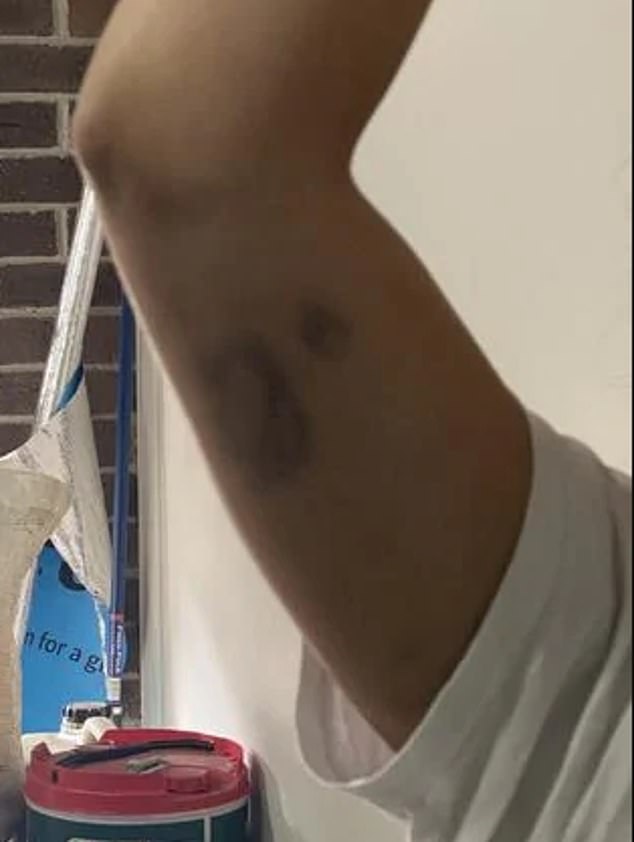 The beauty business owner claimed the officers were being ‘rough’ and kneed on her back, constructing her airways and leaving her with bruises down her arms (pictured)

She has since shared photos of her bruised body after footage of the arrest went viral.

Ms Bonett, who suffers from an autoimmune disorder and anxiety, said she didn’t feel safe getting out of her car but had her permit in her hand.

‘I had everything ready to go, he said that’s illegal you need to remove that (car charger). I was just confused why he was stopping me in the first place,’ she told the Herald Sun.

Ms Bonett said the police officers’ response was disproportionate to her actions.

‘If I had known I would be dragged out of the car and my clothes ripped, scratched and bruised, I wouldn’t have done it, but I didn’t know,’ she said.

‘I was in disbelief. I thought he was attacking me, I was happy to comply. I didn’t deserve that, I don’t think anyone does.’

Ms Bonett, who denied she is a ‘COVID conspiracy theorist,’ said she was handcuffed for 15 minutes before her boyfriend gave her driver’s license to the police and she was released.

The beauty business owner claimed the officers were being ‘rough’ and kneed on her back, constructing her airways and leaving her with bruises down her arms. 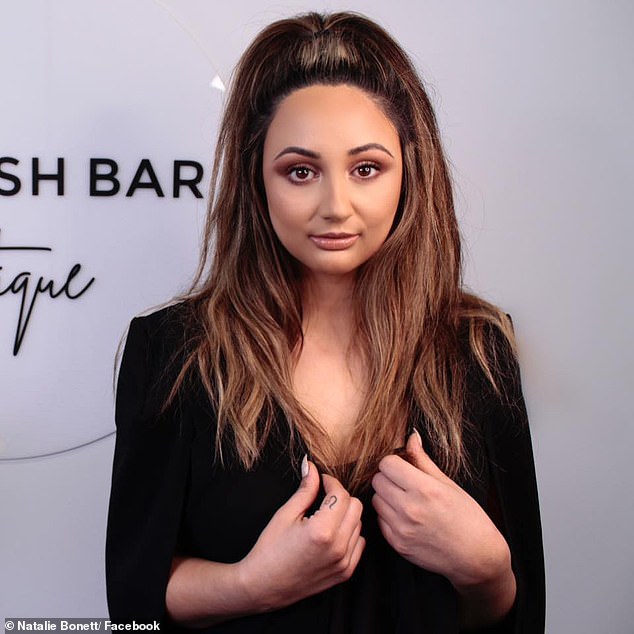 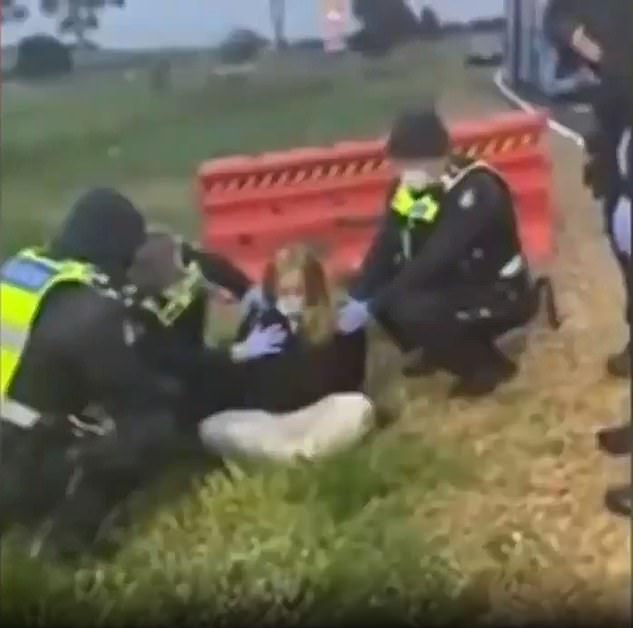 Ms Bonett said the police officers’ heavy-handed response was disproportionate to her actions. 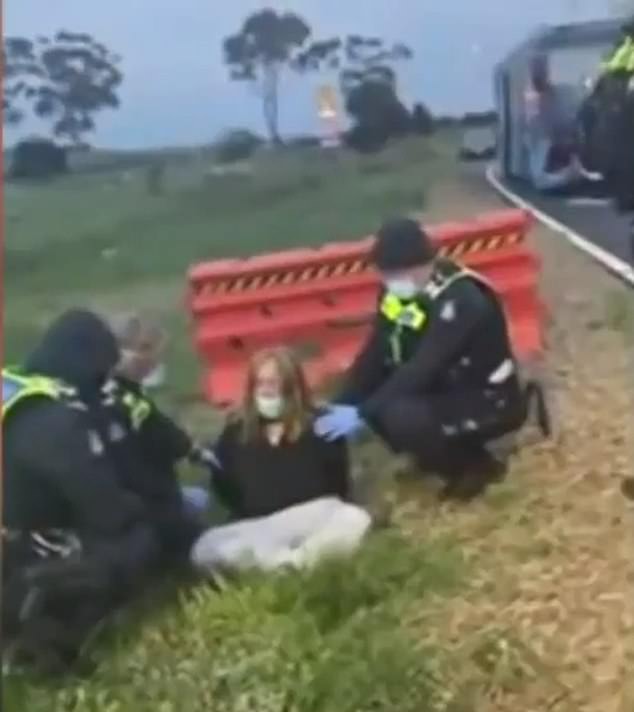 Ms Bonett, who denied she is a ‘COVID conspiracy theorist,’ said she was handcuffed for 15 minutes before her boyfriend gave her driver’s license to the police and she was released

The video showed Ms Bonett screaming while being pulled away from the officer, demanding he stop touching her and get out of her car.

Her boyfriend and passenger attempted to hold her back, trying to tell the officer ‘she’s got anxiety’ while Ms Bonett became increasingly distressed.

Moments earlier, the cop had given her an opportunity to state her name, and asked her several times to get out of the car.

The officer assured her she would be safe before eventually losing his patience and dragging her out himself.

The disturbing footage ended as Ms Bonett slipped off camera when she was dragged from the car.

Victoria Police were quick to hit back at criticism of their arrest, alleging Ms Bonett repeatedly refused to provide her details and driver’s licence. 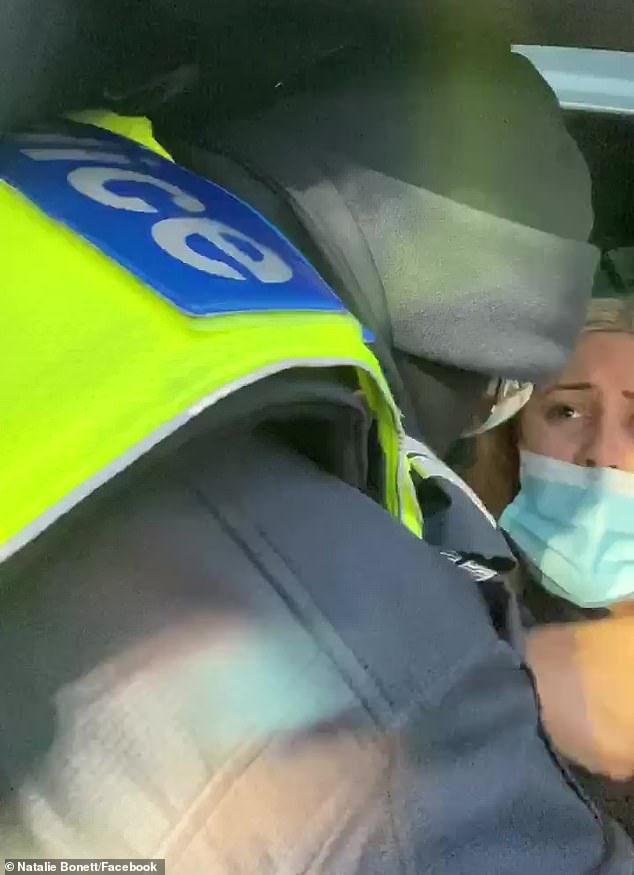 Ms Bonett screamed and resisted in the footage, demanding the officer stop touching her and get out of her car

‘The woman refused to remove her phone from the windscreen,’ a police spokesman said.

‘The woman was warned that if she did not provide her details, she would be arrested,’ the spokesman said.

‘She still refused and was asked by police to get out of her car. When she refused this request, she was taken from the car by officers and taken into custody.’

Ms Bonett  was charged on summons with driving with obscured vision, fail to produce licence, fail to state her name and address, resist arrest, assault police and offensive language.

Ms Bonett said she usually passes through the checkpoint with no issues, showing her license and permit to the officers on duty.

But on Saturday, she said officers took issue with the way her phone was mounted which led to the exchange.

The officer told her ‘the problem’ was with her refusing to provide her name and personal details.

She later revealed on Facebook she filmed her entire 14 minute arrest.

‘If you want to see the video…. you will all be disgusted. I am shaking, crying and in complete disbelief that I was treated this way.’

Ms Bonett claimed officers called for backup when she wouldn’t leave her car and that a total of four police officers eventually arrested her.

‘They grabbed me by the legs and pulled me out of my car and arrested me,’ she said.

‘While trying to cuff me, they had their knees in my back and couldn’t breathe.’ 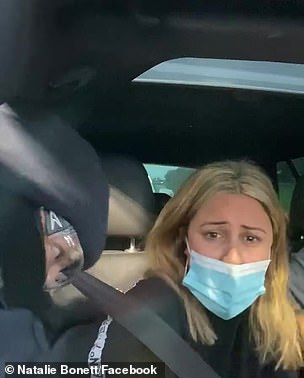 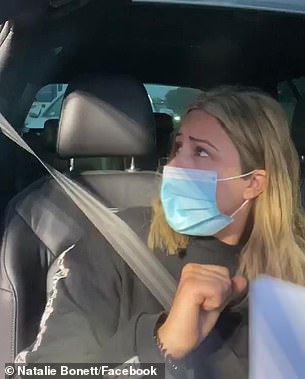 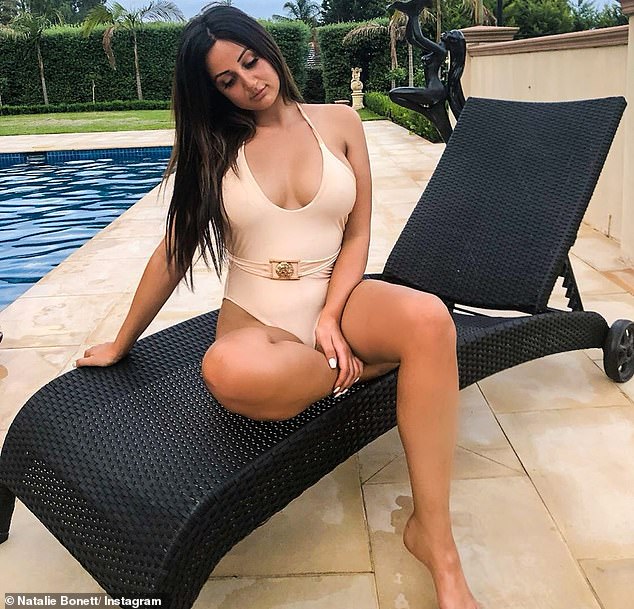 The video has attracted thousands of comments online and divided the public.

‘It’s ugly and appears a massive overreach’ he said when sharing the footage on his Twitter.

‘I won’t jump to any further conclusions as context is important, but there had better be a good explanation by the Andrews Labor government tomorrow.’

In response to his post, Ms Bonett insisted there was no further context needed.

‘I am the woman in this video… I pass this checkpoint everyday and always produce my license,’ she insisted.

‘I see the military daily and don’t have any issues with them, this wasn’t about COVID, this was about me having a car charger on my windscreen and before they asked me to produce a license, they tried opening my car.’ 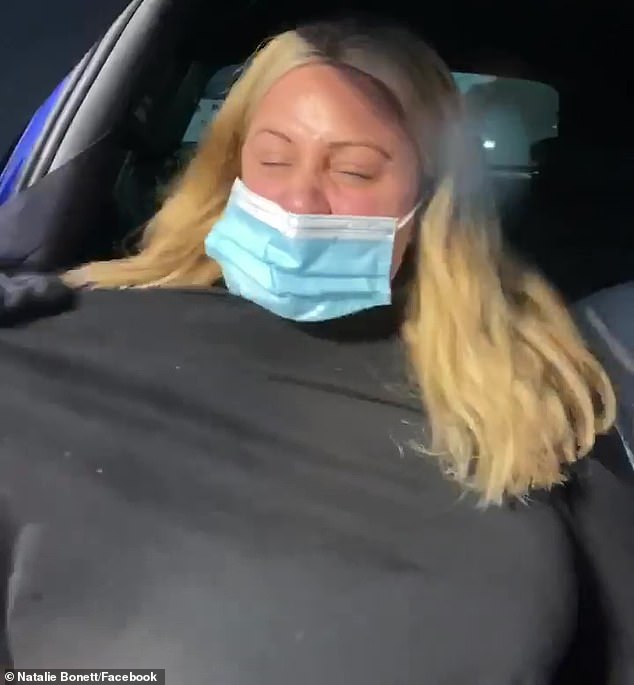 ‘I see the military daily and don’t have any issues with them, this wasn’t about COVID, this was about me having a car charger on my windscreen and before they asked me to produce a license, they tried opening my car,’ Ms Bonett said. 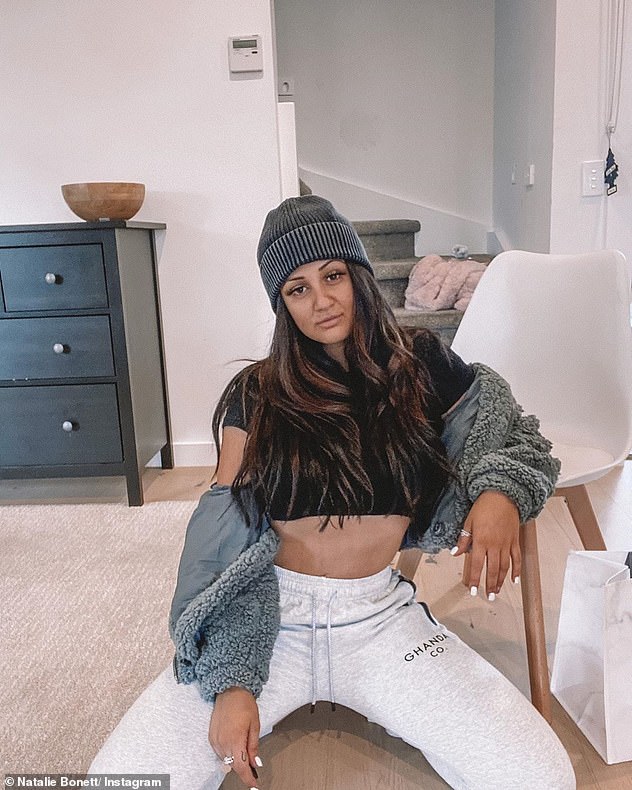 Ms Bonett said she usually passes through the checkpoint with no issues, showing her license and permit to the officers on duty

While Melbourne will remain under stage four lockdown until at least September 28, stage three restrictions in regional Victoria are expected to ease within days.

Mr Andrews said there are only 58 active coronavirus infections in regional Victoria and no new cases since Friday’s update.

He remains hopeful the Stage Three restrictions will be eased by the middle of next week, allowing regional Victoria to be ‘essentially open’.

‘Regional Victoria remains on track to be open to take not one but two steps,’ Mr Andrews said on Saturday.

‘Regional Victoria is so close, just a few days and they will potentially be able to take not just a single step but two of those steps and be essentially open.’