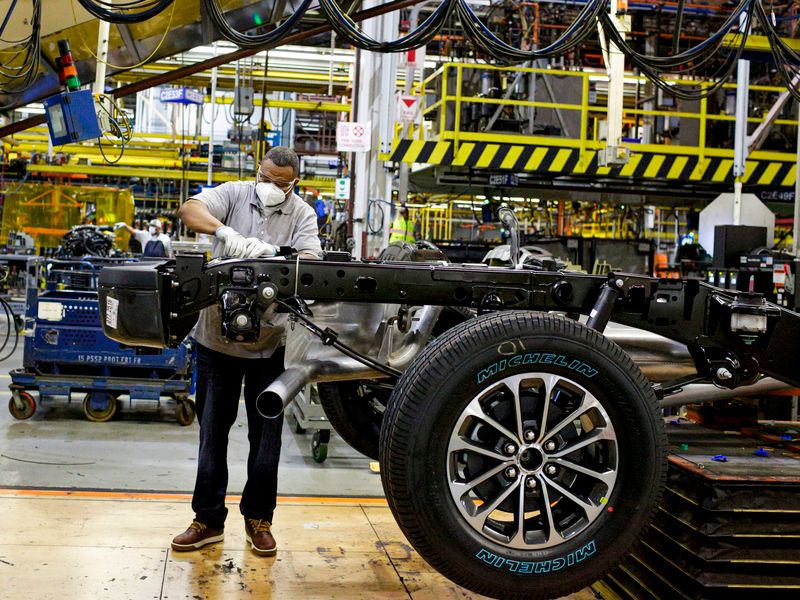 Four months ago, the North American auto industry braced for parts suppliers to collapse under the weight of the coronavirus pandemic—out of cash, drained of resources and unable to restart their crowded factories when the orders came.

But that didn’t happen.

Instead, industry leaders put their competitive nature aside to talk through what it would take to restart factories when the time came. Suppliers held meetings with other companies. They swapped information. They shared best practices and key learnings. And for one season, instead of focusing on sales opportunities, profit margins and competitive advantage, they talked about how to get the industry back on track, how to disinfect machine surfaces, how to keep workers safely distanced and how to rethink cafeterias.

“Suppliers were sharing their lessons learned on how they were able to find solutions,” said Shilpan Amin, vice president of purchasing and supply chain at General Motors. GM’s suppliers allowed the auto maker to share their operating ideas with other suppliers.

“It was this collective effort,” he said.

“We knew we needed everyone’s success to earn our own success. One kink in the supply chain would stop everyone’s production.”

That was the fear as North America’s industry stopped in its tracks in March. Halted vehicle production meant no parts production. No parts meant no revenue coming in, even though overhead costs, worker paychecks and material bills still drained away supplier cash.

Four months later, the industry is not out of the woods.

Dietmar Ostermann, U.S. automotive advisory leader with PwC, who was in the forefront of sounding the alarm of the financial emergency when the industry first stopped, says many suppliers are still reeling from the crisis—at least on their books. The industry still needs $20 billion in liquidity to stave off larger issues in the supply chain, Ostermann said. He estimates that more than 30 suppliers in North America are distressed, or in the financial “danger zone.” In Europe, more than 40 are distressed, and in Asia, the number tops 150, Ostermann reported this month during the virtual Center for Automotive Research Management Briefing Seminars.

Suppliers communicated and collaborated to work through the emergency, Walker said, and he acknowledged the efforts were unusual.

But something completely unrelated may have made it possible for big suppliers to communicate freely when the crisis hit, Walker said: the U.S.-Canada-Mexico trade agreement negotiations that were churning as 2020 began.

Industrywide discussions were proving fruitful in getting disparate manufacturers onto the same page on the trade talks.

“When the virus first hit,” Walker told Automotive News, “because of the communication of the renegotiation of NAFTA, a lot of people very quickly decided we should get together and start having conversations about ‘what should the industry do?’

“Up until the discussions about NAFTA, and most recently, the virus, it was very difficult to get people on the same page and in the same room talking.”

In late April, after Lear Corp. prepared a full, detailed playbook on how it would have to change and operate if it wanted to get its employees back to work safely, CEO Ray Scott ordered the document published in the public domain to let every other manufacturer freely use it.

“We would talk through, ‘How do we work together? How do we manage this? How do we restart in a safe way to protect all of our employees, but also minimize any disruption to the industry?’ ” Thai-Tang said in July. “And it’s worked really well: very frequent communication, good transparency and the spirit of working together.

“We’re very mindful and working very closely with all of our suppliers to understand, first and foremost, their liquidity,” he said. “Do they have enough cash to survive?”

Because auto maker-to-supplier payment terms usually are between 40 and 60 days, suppliers were still getting paid from mid-March to mid-May. As that came to an end in May, Ford and GM implemented fast-payment programs to help suppliers survive the impacts of the pandemic.

Thai-Tang’s boss, Executive Chairman Bill Ford, said there was motivation coming from the memory of the 2007-09 Great Recession, and industry veterans knew they needed to maintain the supply base.

“In the financial crisis,” Ford said, “we found ourselves with a supply base that was incredibly fragile, and in some cases, (companies) simply were not able to reopen.

“I knew the toll that it takes on the supply base,” he said. “And I knew the kind of care and attention we had to give to the supply base as we thought about ramping back up. Hau Thai-Tang and his team just did a fantastic job working with the suppliers, identifying problems early on and then helping them resolve them.”

No ‘eyes and ears’

GM also planned weekly meetings with suppliers to share new information, even if updates were limited.

“One of the things we realized through all of this was it’s OK not to have all the answers, but it’s important to let everyone know what we do know,” Amin said. “It was all about communication, engagement and sharing what we had.”

Amin has helped GM and its suppliers navigate supply chain emergencies before. Because of the global nature of the coronavirus crisis and the uncertainty of cities, states and nations in knowing how to proceed, information-gathering was tough.

The coronavirus swept through China, Korea, Japan and Europe before pummeling the U.S. and halting production for most auto makers and suppliers.

“It was this moving piece,” said Amin. “We were chasing this around the world. As we were solving issues in one location, others are popping up. The size, scope, uncertainty behind this was unlike any other.”

Despite the widespread fears about the financial vulnerability of suppliers, “we were never impacted because of the supply chain,” Amin said.

The efforts took more communications internally as well, said Bob Lee, president of Continental North America. “We were firefighting in early March and April,” he said, “having daily coronavirus war room meetings with our customers because the supply chain was so dynamic.”

Industry organizations such as the Original Equipment Suppliers Association also held frequent conference calls to get input from as many automakers and suppliers as possible. Alternative sourcing, production schedules and demand forecasting were among the topics of these meetings at the height of the crisis, Lee said.

With customers adjusting launch schedules to react to the changing market reality, Tier 1 suppliers also had to reprioritize and replan their output.

“If OEMs decide they want to launch vehicles six months later than they originally planned, you obviously deploy your resources accordingly,” said Lee, who took over as Continental’s U.S. president just as the coronavirus was rearing its head.

“When you have something so big and massive going down for eight weeks and then starting up bit by bit — trying to get a handle on that was extremely difficult,” Mahoney said. “Being able to map where your product ends up is essential.”

How did they do it?

“At the end of the day? Relationships,” she said. “Phone calls. Talking ‘What are you hearing?’ ‘What can they share?’ with certain OEMs.

“You have to know your customer. You have to have that communication in place.”