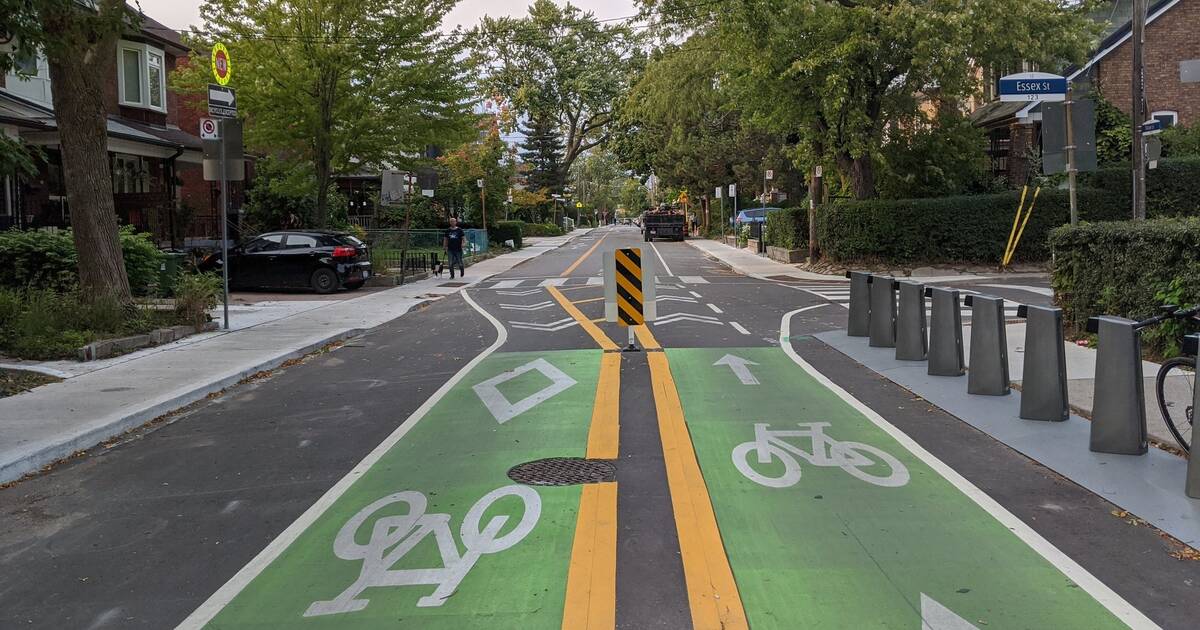 Toronto first installed the contra-flow bike lane on Shaw Street back in 2013, and it became an incredibly popular north-south cycling route almost instantly.

This summer, the city resurfaced the residential street and made several changes to the cycling route, making it even more of a biker’s paradise.

“The purpose of this project is to reduce cut-through traffic and create safer and more comfortable conditions for people walking and cycling,” reads the city’s webpage about the project.

3 mins on a fall evening on the new Shaw Street in #Toronto. Not quite a fietstraat but gives a sense of how much a cycling city we could become w/ the right infrastructure. Kids, seniors, & families safely biking 🚲. What’s stopping us from doing this on more streets? #BikeTO https://t.co/EttstJsp9P pic.twitter.com/AB4mZtxHoT

Updates made on the stretch from Dupont Street to Essex Street include changing to northbound-only travel for people driving, providing a southbound contra-flow bike lane on west side of street, and providing on-street parking on east side of street.

Pleased to have been able to work with @CycleToronto, @CycleTOUniRose, @m_layton, @TO_Cycling, & others to see this change. Can’t wait for it to be ubiquitous. So tranquil to sit here listening to birds, wind, bikes, footsteps, and only the occasional slow-moving car. 🍁🍂🚲🚶🏽‍♀️🍃

From Essex Street to Bloor Street West, southbound-only travel has been maintained for people driving, a northbound contra-flow bike lane on the east side of street has been provided, and on-street parking on the west side of the street has also been provided.

From Ossington to Shaw on Essex Street, the road has been changed to allow for eastbound-only travel for people driving and cycling.

For those not familiar, Shaw is a residential street. There’s a new barrier at Shaw & Essex that is permeable to bikes. It’s NB north of the barrier, SB south of the barrier for cars. Bikes get a contraflow lane to go both ways. Is now a dream 🙂 pic.twitter.com/1fCy6fYGfJ

A number of other changes have been made to traffic directions and more on the remaining stretch of Shaw between Bloor and Harbord, descriptions of which can be found on the city’s website.

Between 2016 and 2019, data collected by the city indicated that roughly 300 people were cycling on the route per hour during morning rush hour, more than 3,000 people cyclists were using it per day, at least 21 per cent of people who live on or near Shaw Street were riding a bike to work or school, and more than 75 per cent of people on Shaw Street either walked or biked during the morning rush hour.

The city also found that the volume of drivers on Shaw Street exceeded the City of Toronto’s Guidelines for a shared lane (for people driving and cycling), and they discovered that 20 to 30 per cent of traffic volume on Shaw Street was due to cut-through traffic.

It’s for these reasons that they decided to give the route a makeover, and the end result — as stated by campaign manager of Cycle Toronto Kevin Rupasinghe — “is now a dream.”