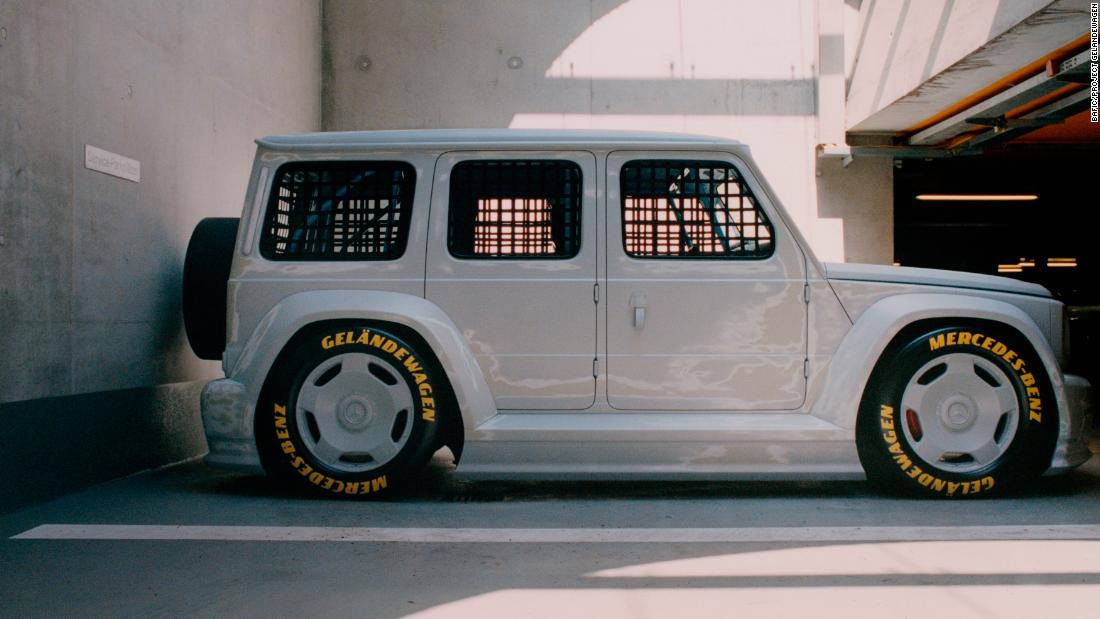 Artistic director of Louis Vuitton menswear Virgil Abloh has unveiled his newest project: a spin on a classic Mercedes-Benz, reimagining the company’s G-Class as a streamlined racing car.

Project Geländewagen, first announced in July, is a celebration of the SUV which turned 40 last year. Abloh worked with Mercedes-Benz chief design officer Gorden Wagener on the one-off creation — and while it’s not driveable, it has been designed down to the last detail.

“I like things that stand out in a crowd,” Abloh said in a joint video conference call with Wagener. The G-Class, he continued, which is often used for off-roading, has an “unassuming silhouette” that one might expect to be better suited “for the mountain.” To remix the car, they looked to NASCAR vehicles for inspiration. “We played with this freedom of cross-pollinating different attributes of race cars and car design,” he explained.

Abloh sees his contribution as a sculpture, and it is already set to hit the art market. A smaller replica will be auctioned off at Sotheby’s Contemporary Curated sale to support an arts organization, with advanced bidding starting on September 14.

A replica of the car will be auctioned off at Sotheby’s, while the original will be showcased in Abloh’s upcoming exhibitions. Credit: Bafic/Project Geländewagen

Though artists have previously turned to automobiles for inspiration — notably the crushed car sculptures of John Chamberlain, the VW Beetle that Chris Burden crucified himself on, or the actual 1970 Dodge Challenger that Richard Prince exhibited in art world settings — Abloh was riffing more on the lineage of the concept car, prototypes that showcase new or radical features but don’t necessarily see mass production.

“(Concept cars have) an eye to the future — maybe technology that didn’t exist yet, or show (what) the future would be,” Abloh said.

“We have had that same unbounded passion to push our professions forward,” Abloh added about his and Wagener’s shared ambitions. “And break rules along the way.”

“The G is such an iconic car,” Wagener continued, while pointing out that working with Abloh “really brings…it out of the automotive world into a new world of luxury.”

Project Geländewagen began when the celebrated fashion designer, artist and DJ, who founded the luxury Off-White label before joining Louis Vuitton, contacted Wagener and expressed interest in creating something together. They settled on a new concept inspired by the Mercedes-AMG G 63 model, and began envisioning how it would look on the racing track.

“The G is such an iconic car,” said Wagener. It celebrated 40 years in 2019. Credit: Bafic/Project Geländewagen

“(We wanted) to put the G into a completely different environment,” Wagener said. “Everybody puts it off road…that’s already out there. So we did the opposite. We turned it into a race car and put it down to the ground and put big racing tires on it.”

Abloh and Wagener stripped down the car to its essentials, then added in bold details and a handcrafted feel. Credit: Bafic/Project Geländewagen

The duo started by reducing the form, “stripping off all unnecessary parts,” Wagener said. The neutral color became a blank canvas. Then came the details suitable for the track: the baby blue roll cage and exhaust pipes, the curvilinear racing seats, analog gauges on the dashboard, a bright red 5-point seat belt emblazoned with their last names, a matching red fire extinguisher between the seats. Despite all these enhancements, the shell of the car is still recognizable as a G-Class — with its boxy shape and spare tire on the back.

Abloh comes from a background of architecture, engineering and fashion. This is the first time he’s experimented with automotive design. Credit: Bafic/Project Geländewagen

Abloh will include the car in upcoming exhibitions of his work — dates and locations still to be disclosed. It may be the first time he’s worked on an automotive project, but he sees it fitting neatly into his broader practice.

“My career trajectory started in design in a more traditional multidisciplinary sense, within architecture and engineering before I (started in) fashion,” he said. “I look at my work as metaphoric — what can exist in different disciplines of design, how you can form a new design language, and engage a younger audience, across icons, using some different techniques and investigations.”