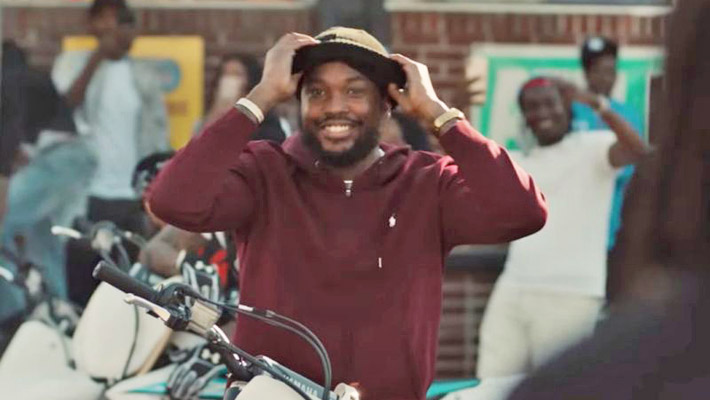 Charm City Kings debuted earlier this year at the Sundance Film Festival, and our own Vince Mancini singled out Meek Mill for his star turn in the coming-of-age story. He also praised the movie’s stunt work, which we get a good look at (regarding the Baltimore dirt-bike scene) in this new HBO Max trailer. The film’s produced by Will Smith and Jada Pinkett Smith and co-stars Jahi Di’Allo Winston (Queen & Slim) as the teenage Mouse, who wants to fit in with the Midnight Clique group of bike riders while wavering between influences.

One of those influences happens to be Mill’s stunt-happy ex-con, Blax, whose interests appear to be at odds with a detective (William Catlett of Black Lightning) and the teen’s mother (Teyonah Parris of If Beale Street Could Talk), who both want Mouse to reach his full potential, rather than dig into gang life. There’s a family tragedy in the rear view mirror, which ups the emotional ante. From the synopsis:

In this gritty coming-of-age drama, fourteen-year-old Mouse (Jahi Di’Allo Winston) desperately wants to join the Midnight Clique, an infamous group of Baltimore dirt-bike riders who rule the summertime streets. His older brother, Stro, was their top rider before his tragic death — a loss that consumes Mouse as much as his passion for bikes … Blax (Meek Mill), takes the boy under his wing, the lure of revving his own dirt bike skids Mouse toward a road way past the straight and narrow.