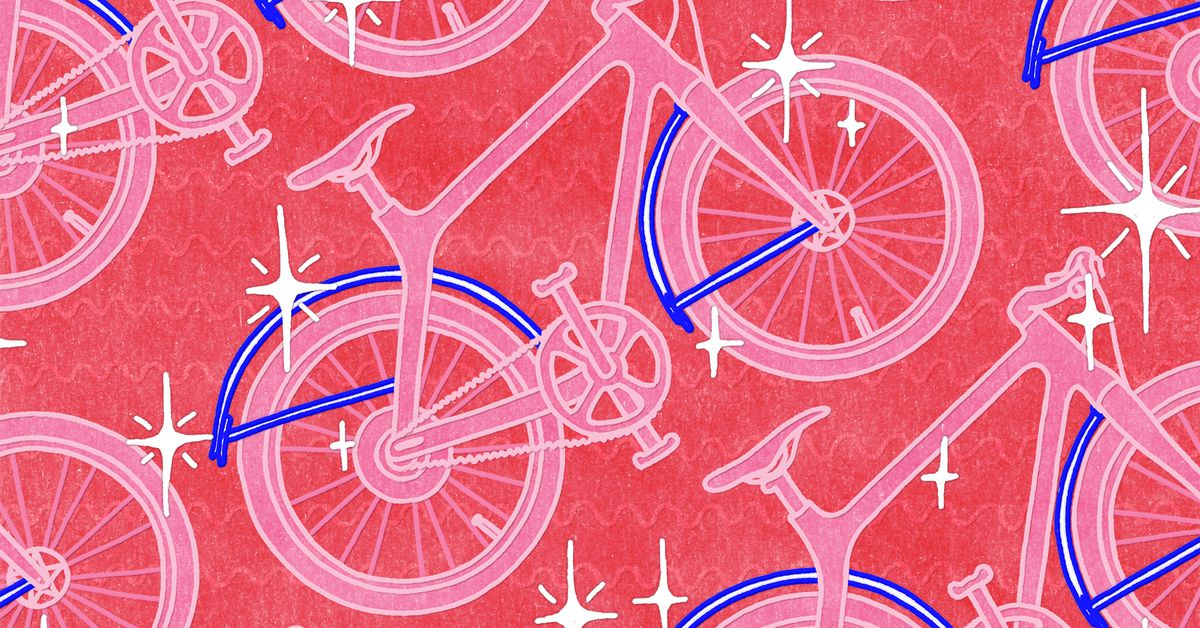 What looks at first to be shambolic, is in fact orderly, and magnificent in its raw functionality. Collado, 52, long black hair cinched as tightly as the tuck of the T-shirt inside his camos, stands at the center, surveying the dimensions of a new Cowboy e-bike suspended from a makeshift pulley.

It’s here, just outside of Amsterdam, that Collado, the skateboarding punk squatter and former rock-n-roll photographer, makes Rain-Bow fenders. A three-year-old business, it’s as eclectic and improbable as the man who started it.

Bike fenders, or mudguards if you prefer, are boring. They’re often ignored altogether by bike manufacturers because they can upset the otherwise clean lines of more premium designs. They also add to the cost, which is why many bikes are priced without fenders, forcing buyers to add them as extra-cost accessories during checkout.

But fenders aren’t optional if you commute to work by bike regularly, as many people do in cities like Amsterdam, Copenhagen, and Portland. You’ll regret not having them just as soon it rains, and you arrive at work with your shins and back covered in road filth.

Rain-Bow fenders neatly frame the arc of the wheel with a bare minimum of material while still protecting the rider. They’re so minimalistic that they look right at home on Gogoro’s stylish $4,599 Eeyo 1S electric bike. Rain-Bow fenders are also available in standard cuts for a wide variety of bikes, or custom fits for Brompton and Velo foldables, and Cowboy electric bikes. He’ll even do one-offs for whatever bike you bring to his studio for a fitting.

Collado’s inspiration for Rain-Bow came during a visit to a plastic supplier while working as a bike mechanic in Amsterdam. “On one of my visits, I saw a discarded piece of plastic that was about 45mm wide. I thought, ‘That would make a great fender,’” says the Barcelona native, who says he took inspiration from Gaudí’s use of geometrical forms on buildings like the Sagrada Familia.

“Why make the manufacturing difficult, why make a mold if this plastic is already bending in a perfect circle? So I asked if I could take it, and they said ‘Sure, have more.’” Collado took the strips home, fashioned a pair of fender stays out of some old aluminum he had laying around, and Rain-Bow was born.

Collado is entirely self-taught. His ability to wrench is a byproduct of his lifestyle. “The skateboard gave me two things: fitness and a community. In the ’80s we had to do everything ourselves so we built our own skateboards and ramps,” he says. Soon he started repairing bikes for friends while squatting in Amsterdam, living in uninhabited buildings, often lacking power or running water.

“People would build things in return for food or whatever. It’s how the community helped each other,” he says. Squatting instilled a sense of resourcefulness and trade that Collado continues to exhibit today.

Like most small business owners, the pandemic had an immediate and uncertain impact on Collado. During the first few months of lockdown in the Netherlands, he received almost no orders on his Rain-Bow website. So in July he said fuck it, put his online store on hold, and left for Spain, not knowing what would come next.

It was during this time that e-bike sales, and sales of bicycles in general, exploded across Europe and the US. Anyone who had a bike was suddenly pulling it out of storage and having it serviced or repaired.

In August, Collado’s fortunes turned after placing an ad on Marktplaats, the eBay-owned digital marketplace that long ago replaced classified ads in the Netherlands. “I turned the website back on and almost immediately, on the first or second day, I had a guy asking about fenders for a Cowboy,” recalls Collado. Then an order for Brompton Rain-Bow fenders came in and things took off from there. It wasn’t the first time he had advertised on Marktplaats, but his previous attempts that summer had proven ineffective.

It’s at this point that I suggest to Collado that Instagram ads could help. “Yeah, maybe,” he says with a shrug and laugh. “I’m not that good at marketing, I have to say. Oh, well.” He prefers word-of-mouth advertising, which is very effective in bike-obsessed cultures like Amsterdam. It’s how I discovered him, after all, seeing a friend’s prized bike fitted with Rain-Bow fenders. Regardless, Collado doesn’t measure success by how much he sells.

“I want to keep it lo-fi,” says Collado about his one-person operation. “I want to be sure that whatever I make is good. It might not be enough to get rich but it’s gotta be good. It’s always been like that, with photography or whatever I did in the past. The main thing is that it gives me a good feeling — that’s really important.”

“What is luxury?” Collado asks, already knowing the answer.